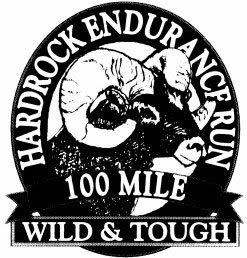 Wild and Tough for sure!

2 for 9? Really? Is Hardrock really all that difficult? For me, yes it is, obviously. For Deb, it went about as good as it could have and she said for the first time it didn't seem as hard as she remembered it.

The Hardrock Hundred Mile Endurance Run is an ultramarathon of 100.5 miles in length, plus 33,992 feet of climb and 33,992 feet of descent for a total elevation change of 67,984 feet, at an average elevation of over 11,000 feet. The race is held on a loop course on 4WD roads, dirt trails, and cross country in Southern Colorado's San Juan Range, USA.

First my story, then a brief summary of Deb's, but her whole story will have to be told by her. If I can get her to write a report, I'll post it. 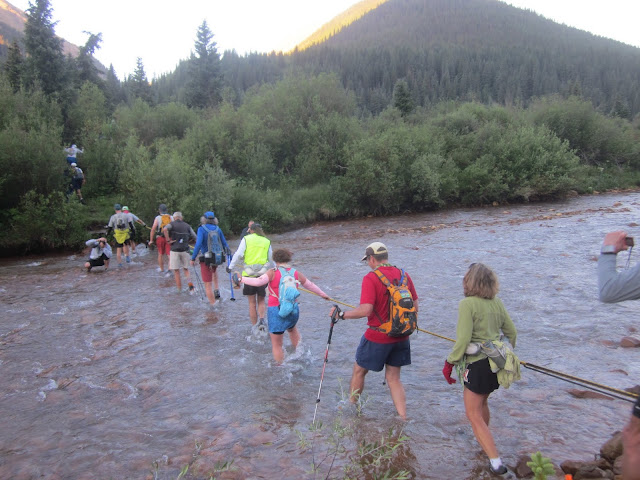 One thing that is a known...I'm getting old. I turned 60 last November and no, I don't feel 60, but when you start aging, things start to happen. With me it's vertigo. It's taken me out of the last three 100's. A fact that In know is my Mom has vertigo....my doc said it's genetic, but can be treated. I think if it affected my daily life now like it was a year ago, I'd be concerned and seeking treatment, but it's no longer showing up on a daily basis, so I'm not concerned. Short story is I'm done with 100's and feel good with that decision...

With Hardrock this year our plan was to run it together with her brother Drew pacing me the whole way. At Kroger's Canteen aid station (Virginius), we were going to re-announce our engagement on this 10th anniversary of doing that back in 2001 at that place. 10th because 2002 was cancelled due to a forest fire in Durango. The day was going well, when just before the aid station, as we climbed up through Mendota Saddle, I felt the first spin. Then nausea, which got increasingly worse as we climbed and I struggled to get down off of the peak in the loose scree. We sent Deb on down to Ouray to get fueled and to take a break and Drew was to catch her soon after that to pace her in. Walking down Camp Bird Road, I had to stop occasionally to stop the vertigo by pointing my flashlight on the ground and stare at that non moving object. About 2 miles up from the aid station, someone came up and gave me a ride in, with Drew continuing in order to run the whole 100 and to try to catch Deb. Within an hour of sitting and drinking Coke, the spins stopped and I got to watch Drew off. He didn't catch her until after Engineer (4 hours later) and the two of them continued on. 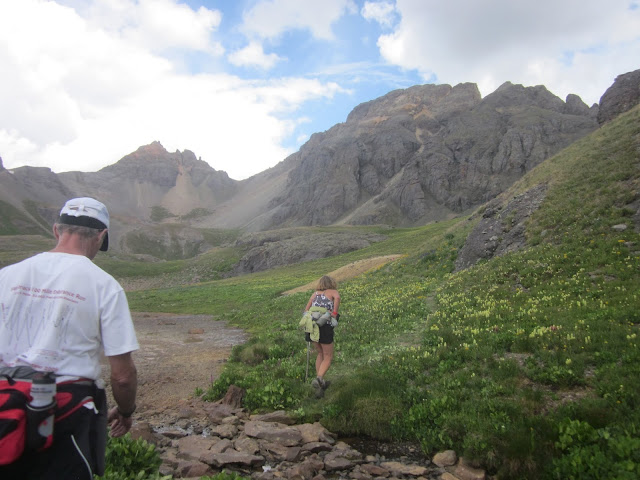 So I'm officially done running 100's....I've been running them since 1998 when I ran a 19:45 at Vermont in my first. Sue Johnston asked me what I thought, I told her it sucked...since that time I've run 8 more 100's and not many of them were positive experiences. I think maybe the 2004 Bighorn was OK, but was still a struggle. So why keep running them? I'm not. I'm tired of running into the night, I'm tired of getting sick to my stomach (all the time) and I'm tired of the struggles. Yeah, I'll still run ultras...mostly 50K's and certainly not longer than 50 in an official race. I'd like to someday get through the VHTRC Reverse Ring to complete that circuit, but that's a fat ass and no entry fee.  I'd also like to see if I can qualify for the Boston Marathon again as a 60 year old.
Life was good before I ran my first 100...I was running races that ended in the same daylight, I was faster, I would sometimes win! Then I got sucked into the 100 mile vortex and the rest is history. Why do we think that if you don't run a 100, you're not a "real" ultrarunner? Why 100? Why not the 24 hour race? I can't imagine those that run those 6 day races...My friend Dima showed up at Hardrock with a shirt that said "Life is Crap" and the image was of a hiker with poles in the mountains with rain and lightening about to strike him on the head. It was perfect...

So that's it, I'm done....and with it possibly this blog, which I also struggle to maintain. 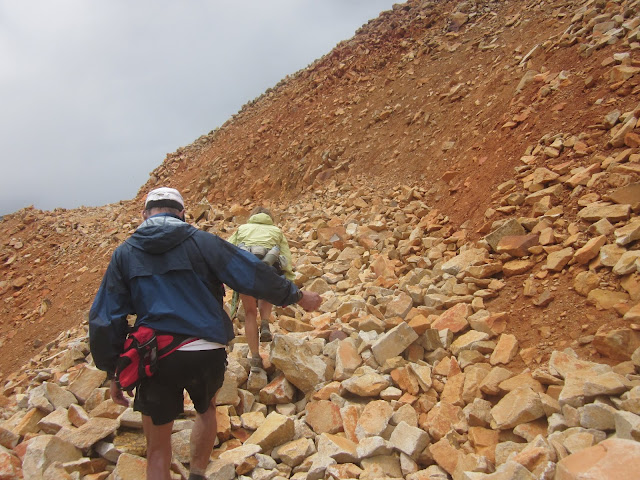 As for Deb's Hardrock, what more can I say than she is bad ass. She was the last finisher, coming in at 47:49 and the oldest female finisher in the history of the run. She has told me that she never really had any bad memories of this year, she just kept moving one foot in front of the other and got it done. One point in the run during the Pole Creek section, her back tightened up and she was having trouble breathing deep, but a chiro adjustment at Cunningham aid station fixed that and allowed her to move a little quicker and get in under the clock. 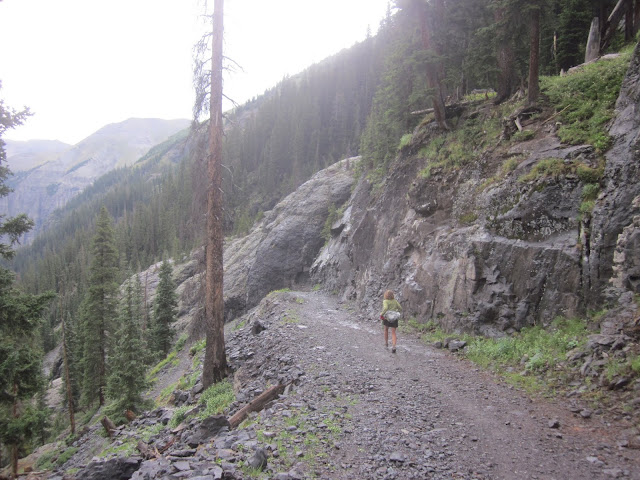 Deb cruisin' down the road through Bridal Veil Falls section

It was a nervous moment at the finish at 5:45am Sunday morning....all the finishers had come in but Deb and Drew. Many of the finishers were there to see the final runners coming in and Margaret Heaphy couldn't stand the suspense and walked up to the corner to look up towards the ski area to see if anyone was coming. We heard her "whoo!" and knew they were headed in, Deb and Drew turned the corner and ran like they only had a minute to spare, which made the whole scenario more dramatic. They ran into the chute and kissed the rock together. Deb for her 2nd official finish, this time in the "other " direction and Drew kissing the rock unofficially. No one was keeping him from kissing the rock ;-) 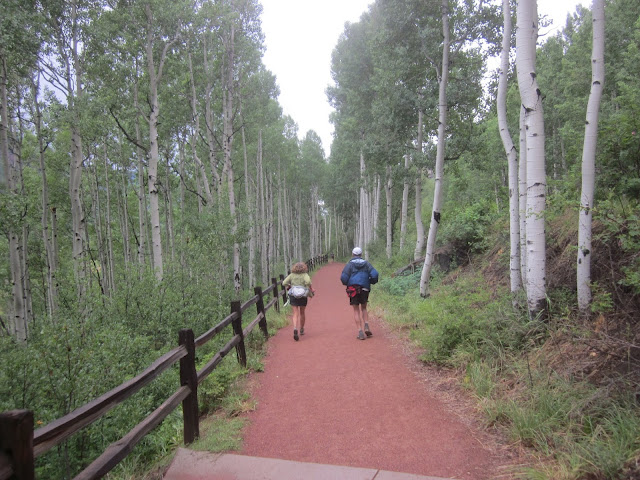 Heading into Telluride on the bike path 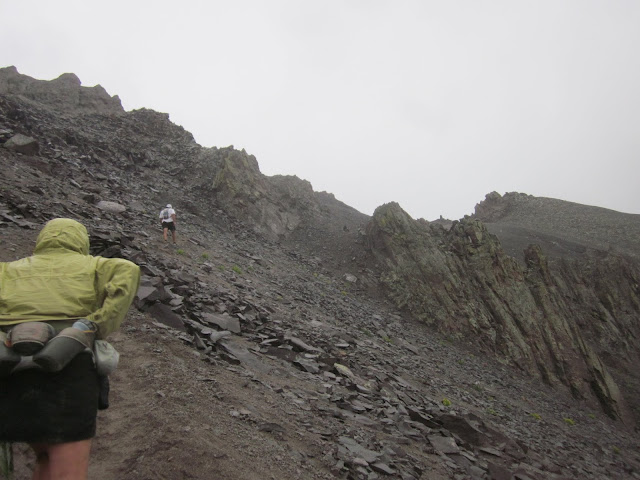 My final picture
The weather turned nasty with hail and sleet and I was beginning to get the spins.
Deb up ahead in the green jacket

Here is a video I took of them finishing...

I really love that video...Deb put everything she had into that finish and now she's a real Hardrocker having finished both directions. Will she ever get in again is the question!

So that's it...next up is the Silverton Alpine Marathon on Aug 25th and after that the Mt Taylor 50K south of Albuquerque last weekend of September. That weekend I was planning on running the Bear, but withdrew rather than waste yet another entry fee. Mt Taylor will  be more fun and we'll be done sometime in the afternoon ;-)
First up though is this coming weekend where Deb is running the Speedgoat 50K while I volunteer there.

Hope everyone is doing well and continues down the path of their choice...
Steve and Deb

12/12 update:
After talking with Deb, she convinced me to enter and leave it to fate whether I run Hardrock again. I did get in and will be running ;-) Life is funny that way!