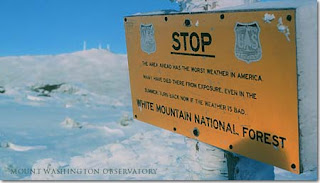 This is the story of a 50K attempt in the White Mountains of New Hampshire, where we get winter weather and many people have died in August. This is August...the RD has us running on most of the toughest trails on and around Mount Washington, the highest summit in the Whites.

To summarize, the weather would not allow most of the field to continue to the finish....

Deb and I arrived a little late for the 5am start. We pulled into the Wildcat parking area just as the runners (Ha! Run?) were gathering for the start. We got going closer to 5:15 and headed straight up the ski slope with Tim Roy, who also started late. Taking over an hour to get to the top (1.3 miles), we ran into John Dewalt, Craig Wilson and Rick Kerby on the summit and we all started down on the AT together. The trail down was a typical White Mountain trail....very rocky, wet and slippery. On the way down we ran into Paul Meltzer, Hunt Bartine and their friends Jen and Laurie of the Traildawgs. 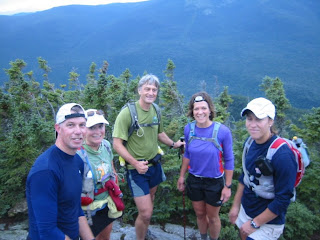 After the first 5k we reached the aid station in 2 hours and went up the Glen Boulder Trail and after about 20 minutes I realized I forgot to fill my bottles, so had to run back down while Deb and Sue Thompson waited for me. I climbed back up with Craig Wilson, while then the four of us hiked up to above treeline and after we took a short break, John Dewalt caught up to us. Soon We reached the Davis Path and then the Boot Spur Trail down into Huntington Ravine.

Deb and I kept going off trail (We ran down ahead of Sue, Craig and John) and kept running back into those three who were methodically picking their way along not making any mistakes. I think Deb and I were just rushing it too much because we then went off course again going down the Tuckerman Ravine trail about a half mile too far, having to run (or hike) back up to the Raymond Path which took us to the Huntington Ravine Trail. This is where the rumbling in the sky that we've been hearing got louder and the flashes got brighter....soon we were being pelted with pea sized hail, which then turned to heavy rain. It was in the upper 40's...we were getting 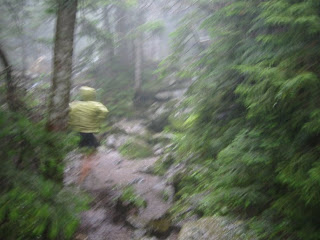 cold, so kept moving as fast as we could. This picture is of Deb running to keep warm, while I was running trying to take this picture. My map and directions were destroyed by the wet conditions, even though they were in a baggie. Somehow my camera survived....it's a Canon.

About halfway up the trail we came upon a rock overhang and again ran into Craig, Sue, John, Rick and with them was Mike Dobies and his friend Pat who were hunkering out of the storm and the lightening. I didn't want to stop because I didn't want to get cold, so Deb and I continued up not knowing what we were about to encounter and everyone followed, somewhat reluctantly, I think.

The Huntington Ravine trail is one of those that I have never had the pleasure of enjoying. It started with VW sized boulders you had to climb over or under, then you had to hike right up 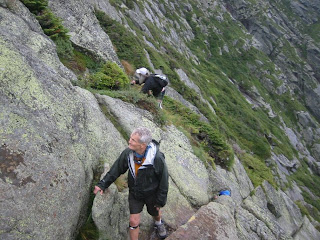 through a waterfall. The trail WAS the waterfall and we climbed right up into it! Soon we came upon what the Huntington Ravine Trail is famous for, the climbing of the Tuckerman Headwall, a place where spring skiing is infamous. It is a sheer cliff at maybe a 30 -50 degree slope with hand and footholds (sometimes). As I hiked on, following Craig and Rick, I also looked back at the intensely concentrated faces of the hikers behind. I don't know what the looked described, but some would say fear as they looked up ahead. It took us hours to climb this slick headwall, seen in the picture below, and once we reached a somewhat sane section of trail, the Nelson Craig Trail, the lightening started again and with it the heavy, cold raw rain. In a single file we made 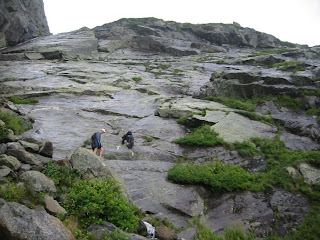 our way to the Mount Washington summit building and it's warm food and drink.

When I went into the building I had every intention of going on and filled my belly accordingly with Chili, pizza and hot cocoa...but looking at the faces around me....the shivering hands, the huddled masses, I knew it didn't look good. Outside the lightening struck the ridge, the rain poured down and the fog was thick. As I asked who was planning on continuing with me all I got was blank stares and shaking heads. They were done and if I couldn't get someone to go with me, I was, too. The only person who said they would possibly continue was 73 year old "Guaranteed Tough" John Dewalt, but he had a disclaimer and that was that it might take him another 24 hours (or longer) to do the remaining 20 miles. I couldn't do that, I would get too cold and be in serious trouble....then Deb made me promise I wouldn't go on alone, which I did reluctantly.

After we finished eating, we all put on every bit of soaked clothing we had and started down the mountain on a trail that would take us back to our campground. It took us 9 hours to do the first 12 miles to the summit of Mount Washington and it would take us another 7+ hours to get back down on a rocky, slippery muddy mess of a trail, with many river crossings...but we stuck together and chatted all the way down to take our minds off of the cold and wet bodies. This 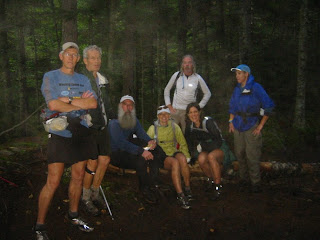 picture is of the group of 7 that hiked down together. From the left is me, John Dewalt, Craig Wilson, Deb Pero, Pat in the back, Laurie Reinhart and Sue Thompson. Missing is Mike Dobies, Rick Kerby and Hunt Bartine, who went down to the aid station to tell Jonathan we were done and Paul Melzer and Jen Erickson, who went down ahead of us.

That's it....there were 7 finishers... Garry Harrington finished first (he told us that he missed all the weather) in a time of 11:01 (there are no course records because the course changes every year), in 2nd was Jeff List and Brian Rusiecki, 3rd was Andrew Thompson and JB, who finished as we were walking into the campground about 15.5 hours after they started. The final finishers were Jamil Coury and Jim Harris. Just to let you know that Jamil ran sub 24 hours at Angeles Crest, finishing in 5th and he paced his brother Nick to a 5th place finish at Hardrock. Jim Harris' running history most of you know of.

The best part was the friendship, campfire, good food and beer and great war stories around the fire as we waited for Jamil and Jim to come in. Rick and I failed to get our 5 year finisher's Loincloth and beer stein, but we still have our lives and limbs, so I guess it was a good thing to not go on...if Deb and I are still living here next August, I will certainly be going after those again.

Here are some pictures I took during the event...
http://picasaweb.google.com/ultrastevep/2008MMD50K

A big thank you to Jonathan for putting this event on and to Pat and Anke Wheatley for manning the aid stations and watching Tucker for us while we ran and hiked. Also to those who dropped earlier and were manning the stove for us that were out there longer.

On to the next event, which is looking like Hellgate 100K in December. Until then some road races and a road marathon.
Steve
Posted by Steve Pero at 8:26 AM 6 comments: