This post is going to be a short and sad one....

First up is that we ran the DRB 50k yesterday. It was my 13th (out of 14 runnings) and Deb has run around 10-11, having to stay home with the granddaughters some years, but letting me come down and run it.
The trail is incredibly rocky and hilly and is a true test of endurance and strength.
We both had good runs...I ran 6:06 and finished 3rd place with two guys that I ran with all day. They were staying with me because I know the course and do not have to stop to look at the map at all. Paul Funch and Bogie were good companions throughout the day and I'm sure they're thankful for the great finish time and not needing to ever look at the map.
Deb ran with several people during the day, but finished with Rich Collins of Maine in 7:27 and was the first woman finisher overall at the tender age of 56.
The talk of the day was the overall 50 mile finisher, Josh Katzman. I held the 50k course record of 5:39 for 9 years until last year when Josh and Garry Harrington worked together to take the record down to 5:18. This year on the way in the 50, Josh ran 4:57 for the 50K and finished the 50 mile in 8:44 after getting lost in the last section.

Results and report by Josh can be found here http://www.trailanimals.com/index.php/?p=445

Deb and I both ran in LaSportiva trail shoes, I started in the Crosslites and switched to the Wildcats at 16 miles because the rocks were beating up my feet in those minimalist racing shoes.  Deb wore her Wildcats all day.
Drymax socks were between the hooves and shoes...
The biggest thing was using the First Endurance Liquid Shot for our fuel. I used 2 full flasks and part of another for about 1000 calories and it again like last year felt like rocket fuel. Every time Bogie saw me pull my flask out of it's holder and take a shot, he said "Oh no!", because he knew it meant a quicker pace was coming. Deb also used 2 flasks and never had an issue. This is great stuff!

Now about Tucker....while we were at the race, we had him in a kennel and due to his separation anxiety, he tore apart his cage and shredded his paws. Deb said they looked like he had run them through a meat grinder.

For several years now Tucker's vet has been telling us that due to this mental illness of his, we were not doing him any good keeping him for our companionship. He was in constant torment unless Deb was with him. He even got anxious when with me, but he was "OK". So this morning Deb brought him with his bleeding paws and most certainly in a lot of pain to the vet to discuss this with her and the vet said it was the only right thing to do. Deb said it was peaceful and he just closed his eyes and went to sleep.

So Tucker is gone, we will miss him but he is now in a better place. We had 8 years with him, some good, some very difficult...but one thing for sure is he was the best trail running companion we could ever have had.

Here is Deb's tribute to Tuck on her blog
http://debpero.blogspot.com/2010/04/not-about-painting.html

And here is a video that Deb created last night...

It's a very sad day in the Pero household....goodbye, Tuck... 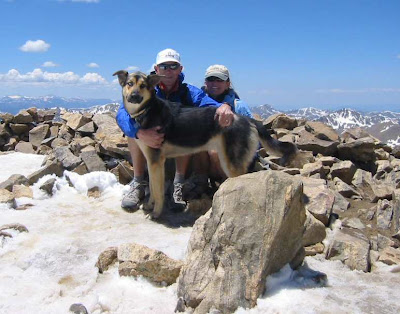 Here we are with Tucker on the Summit of Mount Elbert in Colorado
Tucker loved the mountains
Posted by Steve Pero at 11:03 AM 15 comments: