This past Saturday was the Jemez Mountain Trail Races, which included a 1/2 marathon, 50K and 50 mile trail race. This being a local race, Deb and I decided to volunteer and give back to the sport, rather than run it. We have plenty of opportunities to run other races, but the local races need volunteers as much as they need runners, so that was how we spent this past Saturday, as captains of the last aid station, which was 1.9 miles from the finish. We saw the runners at their worst, patched them up and sent them in to the finish.


Here are your hosts of the Last Chance Saloon 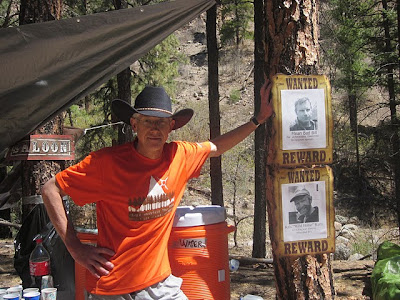 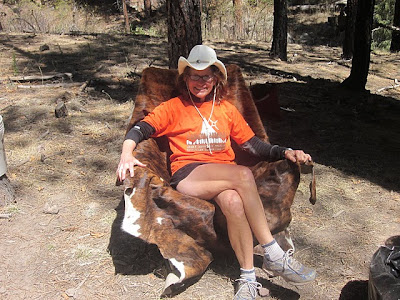 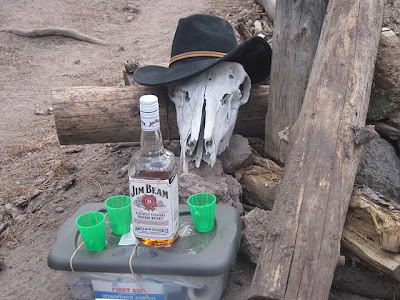 We dared ya'....and had many takers!
(Notice it is with the first aid)
Originally we were to be the 50 mile sweeps, but the race committee had that covered by a couple of Los Alamos high schoolers on bikes who did that last year, so were asked if we'd be up for the final aid station captainship, which we took on not knowing what we were getting ourselves into. Last year's captain of this aid station moved up to being the co-aid station coordinator. 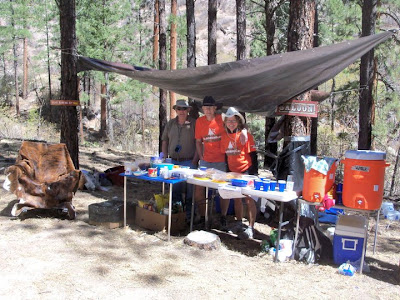 Alan, our radio guy joined us for a photo op.
Taken by Michelle B of Dailymile
Turns out, other than the hauling and and even worse, the hauling out of supplies in darkness with headlamps, we had a lot of fun and hope we helped some runners have a better day and get to the finish line.
It was about a half mile in and out of the canyon to the aid station site and around 60 gallons of water, tables, chairs, tent, sleeping bags and all the other food and drink had to be carried in by hand due to the rough nature of the rocky and sandy canyon floor. The carrying in we did over two different Fridays, but the hauling out at 10:30PM after a long day was not easy. Our day began at 4am when the alarm sounded and at 1am when we finally got to bed in our cabin in the Jemez Mountains, about 35 minutes west of Los Alamos, where we had several runners staying over the weekend. 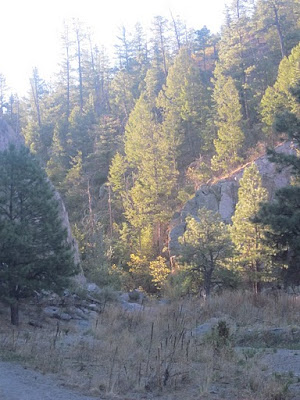 Rendija Canyon trail leading into the aid station, where we had to go to and from a half mile each way with supplies
All in all we had a great time....the weather was perfect, a little chilly for the volunteers, but good for the runners. Following are some photos I took during the day when I wasn't driving back and forth to the store getting ice, Coke and other supplies we ran out of during the heat of the middle of the day. We made many new friends and mentioned my idea of a Texas BBQ at the station for next year, which got a unanimous approval! There were no major injuries or issues, just the usual vomiting and some chair sitting just a little too long before we kicked them out. 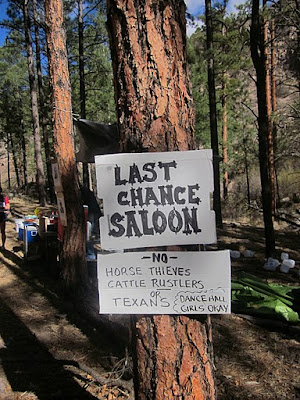 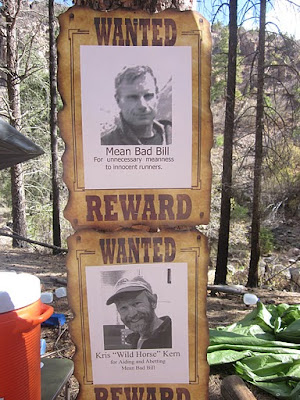 The men responsible for the pain you are feeling
Here are the all the photos I took during the day https://picasaweb.google.com/ultrastevep/LastChanceSaloonAidStationJMTR#
Many runners were missed because I was out running errands off and on.

Results can be found here:
http://www.highaltitudeathletics.org/results.htm

For us it's on to the San Juan Solstice 50 mile trail race on June 18th, but first we work another aid station at the Run the Caldera Marathon on June 11th and last we heard we're #'s 8 and 10 on the wait list for the Hardrock 100, so we're hopeful on getting into that.

Until next time,
Steve and Deb
Posted by Steve Pero at 11:08 AM 3 comments: