This is the 9th anniversary of the infamous death run of 2000, where Sue Johnston, Greg Loomis, Deb and Steve Pero trekked from Mount Monadnock to Mount Sunapee, a run/hike of about 54 miles. This was training for the upcoming Massanutten 100 Trail race and was intended to tire us beyond fatigue to better prepare us for the event that year.

This trail named the MSGT or Monadnock Sunapee Greenway Trail goes from the summit of Mount Monadnock to the summit of Mount Sunapee, but in order to get to the summit, one needs to climb to the top of one and then hike or run down the other, thus the 49 mile long trail becomes approx 54 miles.
This death run was thusly named due to the freezing rain that occurred during and without getting into many details, we reached the summit of Mount Sunapee all nearly frozen solid, soaking wet and tired. Deb's hair was frozen to her head! The wind up on Sunapee almost blew us off the mountain....We were shivering so uncontrollably, we were getting ready to break into the summit house just to get out of the weather. Sue eventually found the right trail down and we sprinted down with everything we had, with whoops and yells when we saw the small red Golf in the ski area parking lot.
Last year we did this run and it was a great run, photos from that adventure can be found here.
This year Deb and I decided that we would not run the whole 54 miles, but would run the 35 mile out and back northern section from the little town of Washington to the summit of Mount Sunapee and back. Because we start a tad north of Washington, driving to the trailhead to avoid some roads, the distance is 31 miles. Anyway, without going into a lot of text here, consider this a blogtorial as pictures tell the story.
Long story short, today was the first day over 80 degrees....it's not been more than about 50 degrees since Winter, which was only a few weeks ago ;-) Just last week's running of the DRB 50K trail race was around 50 degrees. That and the fact that an ice storm in December had the majority of the surrounding trees laying across the trail, made it next to impossible to traverse without stopping every 50 feet to hop over, crawl under and get scratched by trees and branches.
It took us 4 hours to go about 11 miles, making it to Lucia's Outlook. We made the decision to turn around there due to the heat and the fact that there just ain't no water to be had out there. We were both carrying about 80 ounces of water, but it just wasn't enough. The return trip (more downhill) only took 3:40 for a 7 hour and 40 minute 22 mile workout. It was a great heat training run with long climbs for Deb with MMT coming up in three weeks, so it was still good. With that I will proceed with the blogtorial: 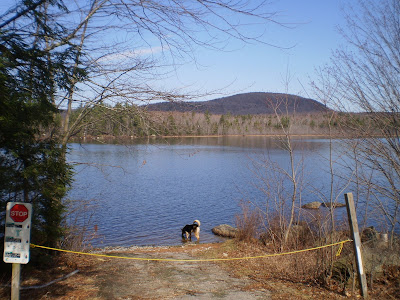 Tucker getting a drink from the lake before we begin 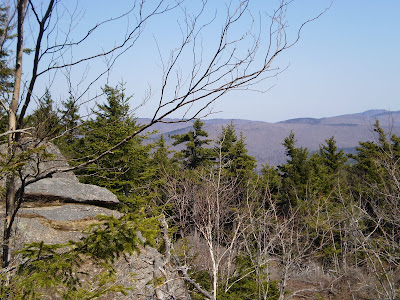 Nice view from the summit of Lovewell Mountain, our first climb 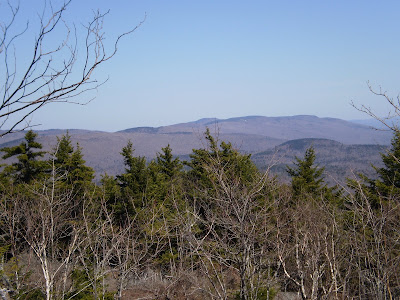 Yet another pretty view, but.... 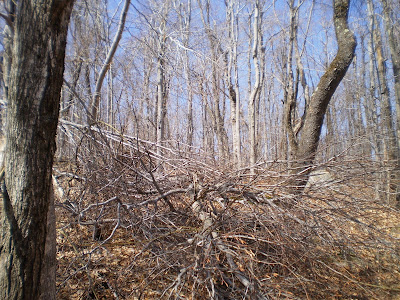 The ugliness begins...this is the trail we came upon on the other side of Lovewell... 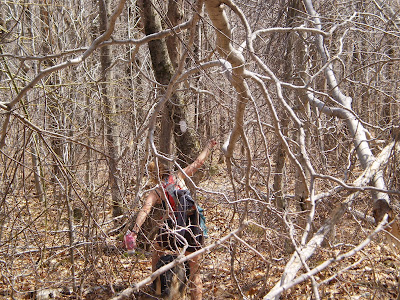 Deb trying to get through some tree mess....see the blaze? 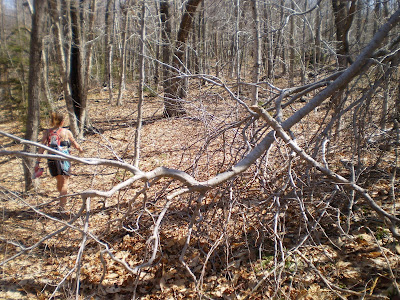 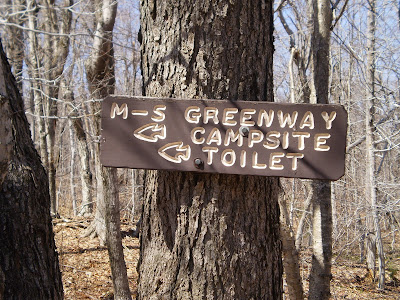 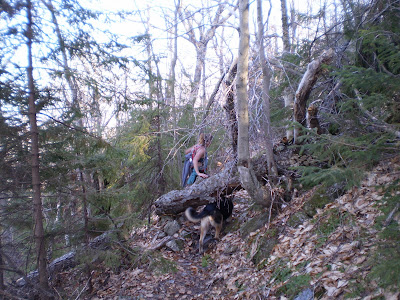 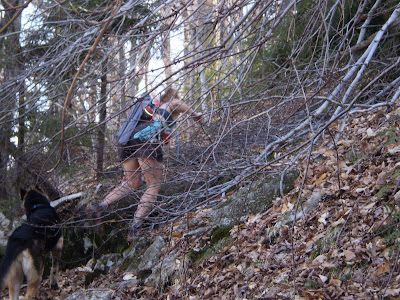 Ha! Even Tucker doesn't know how to get through this one! 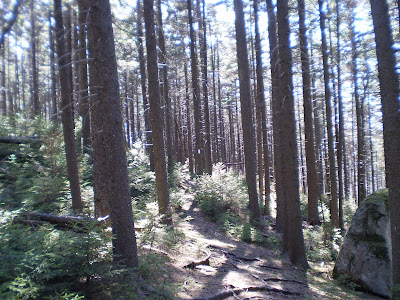 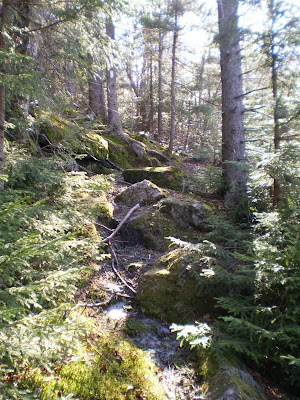 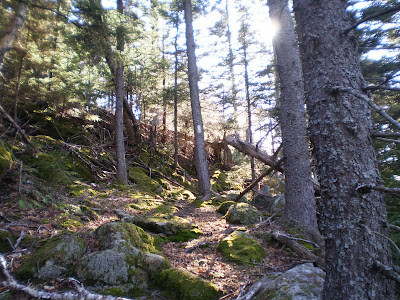 New Hampshire at it's best... 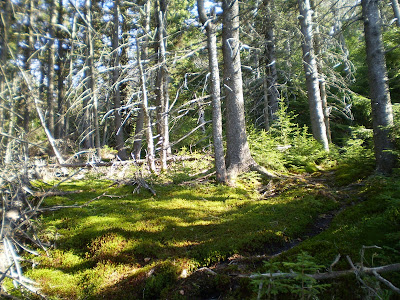 Green and sunlight, Deb was loving it and seeing painting possibilities everywhere! 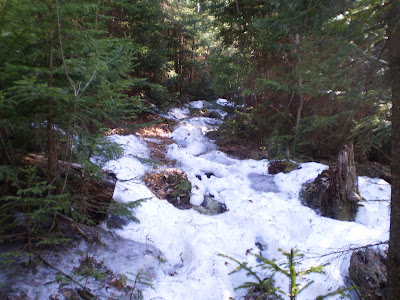 Oh and being New Hampshire, of course there was snow...85 degrees and snow underfoot!

Tucker was having a tough time with the heat...but whenever we came to a snowpile, he just rolled in it and we let him so that he could cool down. 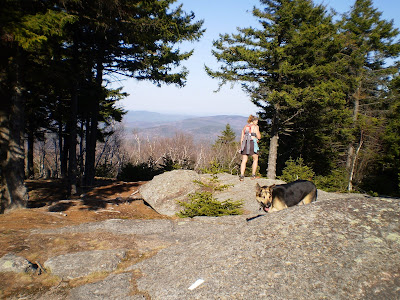 Yesterday was the 13th running of the DRB50K trail race in Milton, Ma. This trail race is one of the gnarliest, rooty and rocky trail I have run. It is a mini Massanutten. The climbs are relentless and because of the rocks, running fast downhill is a challenge. The origin of DRB is that is was run that first year as an obvious alternative to the Boston Marathon. The Don't Run Boston 50K is a really good run that has become a reunion of friends.

In this 13th running were myself and my wife, Deb, both Wasatch Speedgoats. I have run 12 of them, having lived in NM for one of the running. No one has run as many. I also "was" the course record holder with a 5:38 time run back in 2000, this year two younger and faster bucks learned the course and blew away the CR by 22 minutes, running 5:16! It was a great day to run with temps in the upper 40's and full sunshine with a nice breeze on the hilltops to cool you off after a long climb.

I ran the race, finishing 5th overall in 6:16, only 38 minutes slower than my old CR and at 57 years old, without a doubt the first senior finisher. The next oldest guy up front was one of the CR breakers at 49 years old. Deb at 54 was the only woman finisher, so therefore was the first woman finisher. Both of us ran times much faster than we had been averaging over the years, so it was a great day!

Now about my race....being a true Goat, I wore my LaSportiva Fireblades and other than a small stone bruise on my forefoot, these shoes performed magically. Many places you run straight down what some would call a cliff face and these shoes stuck like glue, never did I worry about slipping. I had absolutely no blisters and feet looked great after the finish.

I also wore my Nathan Pack, the Elite2V Plus 2 bottle waist pack, which worked great. I liked and wore Nathan packs before I was ever on the Speedgoat team, so need to gloat over the product here. Without a doubt, Nathan makes the best packs for running, as is evident with the amount of Nathan packs at the race.

But what I really want to scream about is one particular product that made my day. Let me first 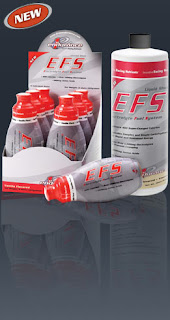 explain that I am prone to stomach issues and absolutely cannot eat anything solid, I need liquid fuels and just the right amount. Too many calories? I'm sick....too sweet? I'm sick. I am known as Steve the barfer because I am always getting sick during and after my ultras. It has become par for the course with me and I expect it, it's just a matter of when, not if I get sick.
Yesterday was magical and I owe it all to First Endurance Liquid Shot. I very skeptically decided to give it a try and was expecting to be tossing the gel flask into the woods after the first sip.

After an easy start, following my HR and keeping it under 80% of max, I started at mile 9 to push and try to move away from those behind me and gain on those ahead of me. This always causes stomach issues, but I had to try....this was, after all a race and i was the course record holder. After coming into the first aid station at mile 13, we do a small 3 mile, but tough loop, climb straight up for 1.5 miles and then run back down on some of those tough and rocky trails.

On this loop, I decided to drop my pack and just hand carry one of my Nathan bottles. I also grabbed the 1st Endurance liquid shot in the other hand and put a regular gel in my pocket because I expected that the shot would be too sweet and I'd need some calories. As I walked out of the aid station, I opened the flask and took a sip. Hmmmm, that's pretty good! Within 5 minutes I was cranking up the hill and caught a runner at the top, then blasted down the other side, running this section (3 miles) in 36 minutes, catching 2 other runners in the aid station. The aid station volunteer said to me "You're back already? That was fast!" I mentioned to him it must be this rocket fuel I was using. From that point on, all I could think of was the Rocket Fuel! Every hour, I pulled out the flask and took a good sip and within minutes felt like I was buzzing, flying along. I want to mention that there is no caffeine in this, so it wasn't that.

To wrap this up I just want to say that this is "the" best I have ever felt during an ultra race. I never bonked, never felt tired, never cramped and most importantly never had the slightest nausea at all. I ran this race like I ran it the CR year in 2000, running just about all the hills, never even thinking of wanting to walk. I wanted to catch more runners and almost did! The difference between 2000 and 2009 is then I barfed after I finished and was walking in a cloud during, just on the verge of bonking. This year I felt energized all day long....and never got sick.

First Endurance, thanks for a great product, I feel like I have gotten a lease on life in my Ultrarunning. A new start...

Also in play here is I have done nothing but low HR training in the past 6 weeks, which I wrote about in my previous post. I go out to run and keep my HR under 135 and all I can say is it's working...

Here are the results from yesterday:

Times truncated to the minute

'til next time!
Steve Pero
Posted by Steve Pero at 8:34 AM 7 comments: