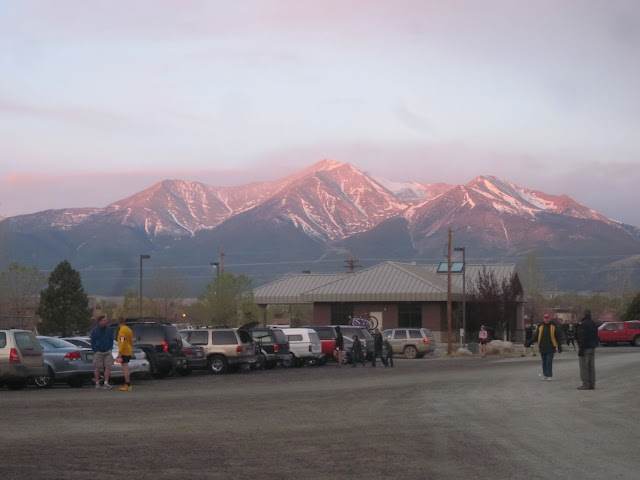 Sawatch Range in the early morning

Saturday, April 28th, Deb and I ran our first real ultra race of the year, the first stepping stone to Hardrock. Yeah, we've run the Salida Trail Marathon in March and a 33 mile sweeping stint at Cedro Peaks a few weeks ago, but this was our first "A" race of the year. 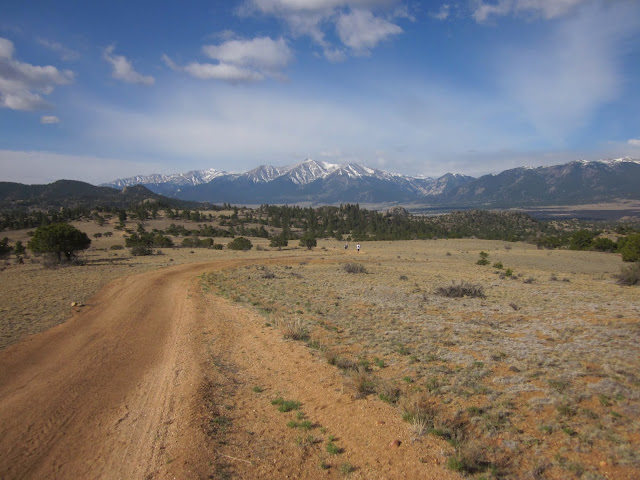 The Sawatch Range Collegiate Peaks were with us all day

Going into the race my training and goal all year was to win my age group and set a new course record for the old over 60 guys. The record was 10:59 and based on my Salida time of 4:58, I thought it was doable if I ran a smart race. Deb missed all of last year with a messed up body from a nasty truck accident, so her plan was to get a finish and feel good doing it. I can't speak for Deb, but my race went as planned, but not without a hitch. 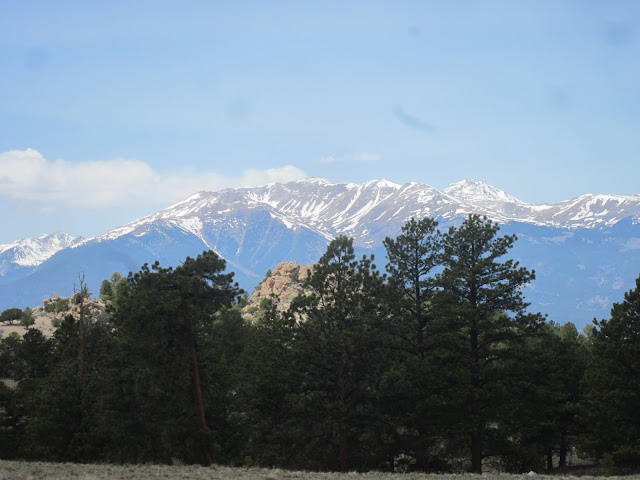 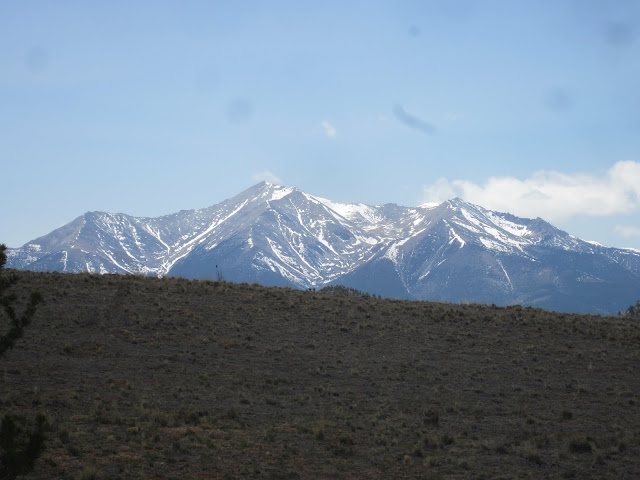 Our view all day 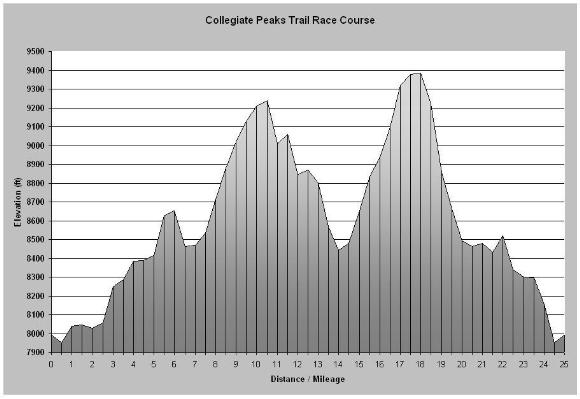 Profile of each loop

The start at 6:30am was chilly in the upper 20's and it warmed up a bit during the day, but only near the S/F area at the turnaround and finish was I able to strip down to a short sleeve, it was just too chilly and breezy up there.

Even though there were 400 runners in the race, it never felt crowded due to the start being on a road out of town and by mile three we were spread out enough so we never felt crowded on the single track trail section.
As I wrote earlier, my goals were age group win and a new course record, so I went out at an easy enough pace to be as close to even splits as possible. I knew of several other runners in my age group, but wasn't sure what their plans were, so never looked around to see if I saw any competition...I merely decided to enjoy the first loop, taking pictures of the aid stations and awesome views of the mountains and work the 2nd loop to maintain pace as best as I could. 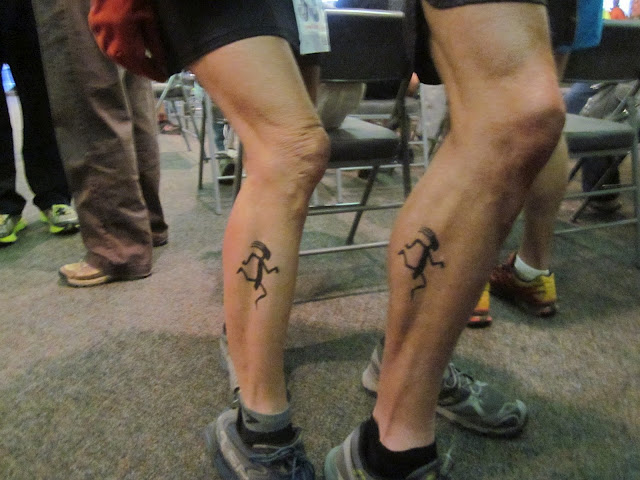 Deb and I showing our Performance Enhancing Kokopelli

My fueling was gels and water only, which works well for me at least up to 50 miles. I switched between EFS liquid shot and a new one I found named Chia Surge.  Chia Surge claimed of their gels caused a slow time released sort of method of fueling the muscles, so I decided to try these, using one every other feeding, which was approx. every 30 minutes. I never bonked (well, almost never, see later on) and felt strong all day long with no stomach upset...that I think was attributed to maintaining a sane pace and the cooler temps. 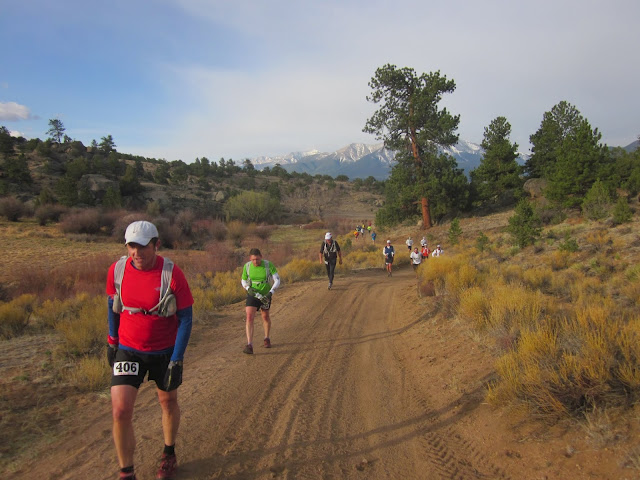 Line of runners coming up behind me in the early miles

The first loop seemed easy and went by quickly...I never felt the need to push the pace and enjoyed passing many runners all day long, in the first loop most of who were 25 mile runners who went out way too fast. Just before I reached the turnaround on the rocky downhill single track, a rock caught my toe and I played Superman with this result. 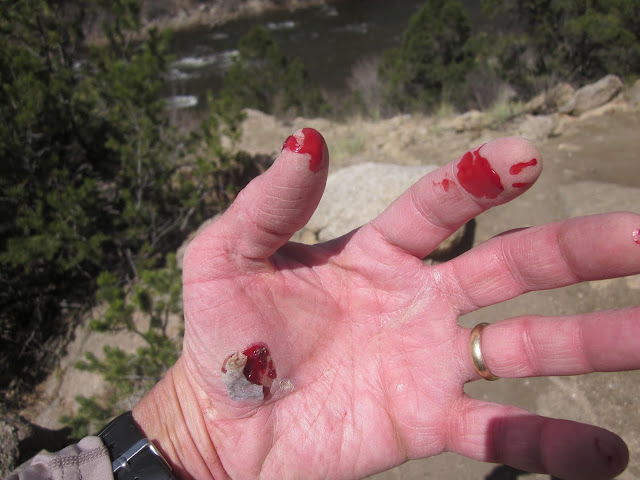 My hand after the fall

Man did that hurt! I tore off most of the skin on the fatty pad area of my hand with several small cuts on my fingers, the other hand and right knee. This is the arm I broke in a fall in 2000 during a race, so the first thing I always do is move my arm around to make sure I didn't disengage the plate from the radius bone ;-)

Yeah it hurt, but there was work to be done still, I'm not even halfway....and of course just before reaching the bridge, I see Roger Jensen is ahead of me by about 30 minutes! Damn! And I thought this was going to be an easy day ;-)

I reach my truck, empty the rocks out of my shoes, leave my gel trash, restock my gels, grab a chocolate almond milk and drink it while walking to the turnaround/check in, which I reached in 4:50. Here I just looked at the table, nothing there looked appetizing and moved on...but I forgot to fill my bottle so had to go back to take care of that....meanwhile Roger pulls further away from me. 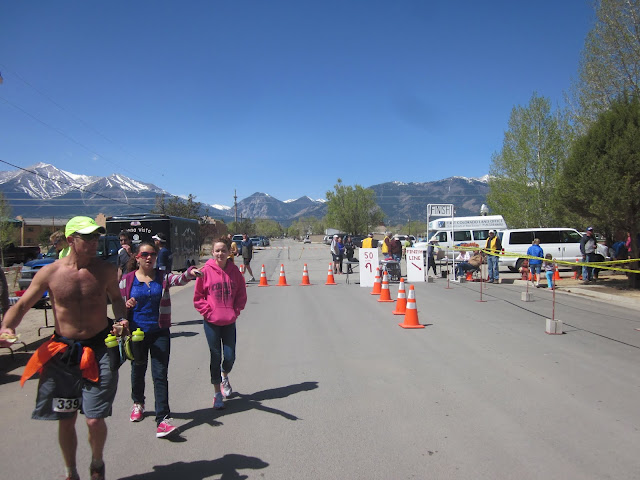 Turnaround for the 50 milers, finish for the 25 milers

Originally my plan was to just maintain pace as best I could and get what time I thought was possible, which I expected to be around 10:30 or 29 minutes under the old course record, held by my friend Rick Hodges...but now I felt like I was going to have to get out of the comfort zone a bit and try to make up some time on Roger, so I started to run most of the hills (well, easy jog) and what I couldn't run, I imagined I was doing my powerwalking workout on the treadmill of 4mph at 15% grade and it worked!

Coming into the mile 38 aid station, I caught up with Roger, who was having a bad patch. I was going to try and get my bottle filled and sneak by him, but he left the same moment I did and started chatting. He must have heard my Boston accent and said "Are you Steve Pero? I've been looking forward to meeting you!". (bummer) ;-) He then started saying about not having a good day and that although his plan was to break the course record, too, he realized he wasn't going to be able to keep up with me and that it was mine if I kept working. I didn't believe a word of it ;-) All I could do is tell him that I felt great and after shaking his hand and wishing that the best man win, I blasted down the hill as quickly as I could to get as far ahead of him as I could. Looking back several miles later, I saw him back there keeping me in sight ;-) The race was on and I was loving it! 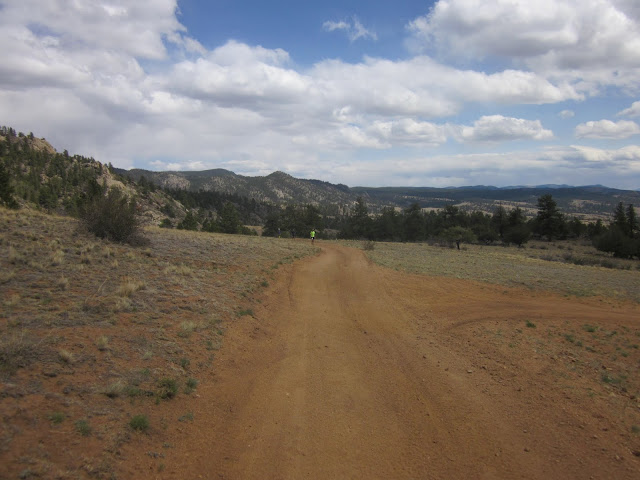 I pushed every downhill as hard as I could and powerwalked the ups as strong as I felt I could maintain without bonking. The gels were going down every 30 minutes and I was saving a GU Espresso Love for the final 3 miles to get a caffeine kick as well as a sugar high.

Everything was going great and I had hoped I put Roger away for good, but on the 2 mile trail section before the road, I was starting to feel the pace, not in my head, but in my legs. I struggled to climb the short ups, the legs were burning and telling me they were ready to be done. I saw the final climb up to the 3 mile road section to the finish, gagged down the gel, stopped for a minute to take some rocks out of my shoes and started to run down that asphalt road as quickly as this trail runner could. At the road I noted my time was 9:40, so I knew I wasn't going to run 6 minute miles to get in under 10 hours, but had to keep working. 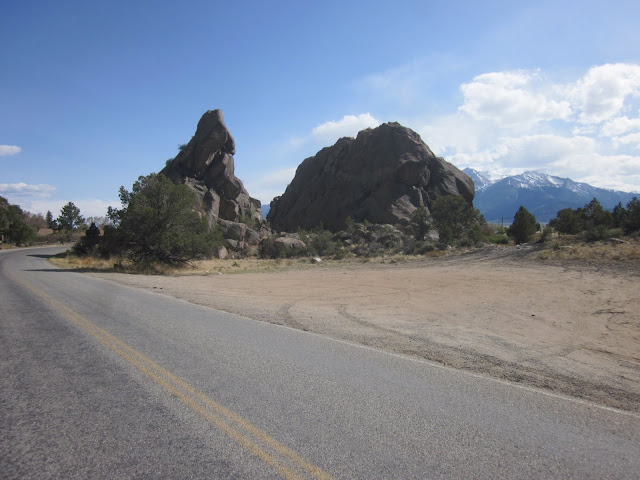 Final 3 miles into Buena Vista and the finish

Little did I know and would find out from Roger after the finish was that he had been training for the Boston Marathon and ran a re-qualifying 3:47 in that awfully hot day. Also little did I know was that Roger spotted me in the distance and made a run for me.

Those final miles hurt...I was tired, my feet hurt on the asphalt and I just wanted to be done. After a couple of miles we turned onto a short trail section along the river to the approach to the finish, which was a run through the parking lot of the Community Center. I always run like I'm the hunted and little did I know that Roger was not far behind me and closing. I ran as hard as I could to and through the finish line and I barely had time to turn around to see Roger flying across the finish right behind me. Whoa! One lesson learned here is to never give up, another is to not wake up a tiger ;-) 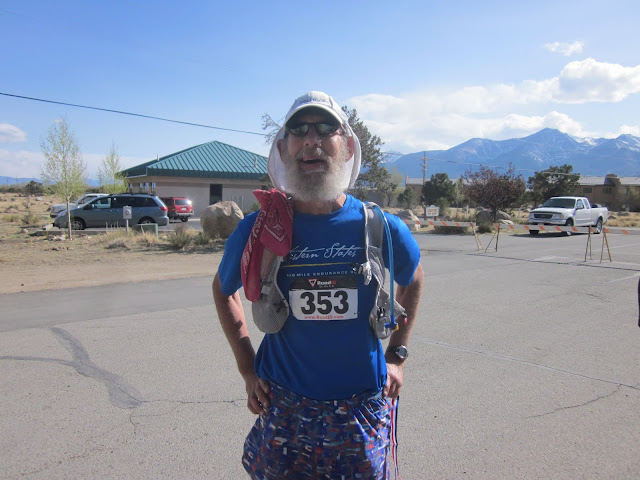 Roger Jensen just after his finish 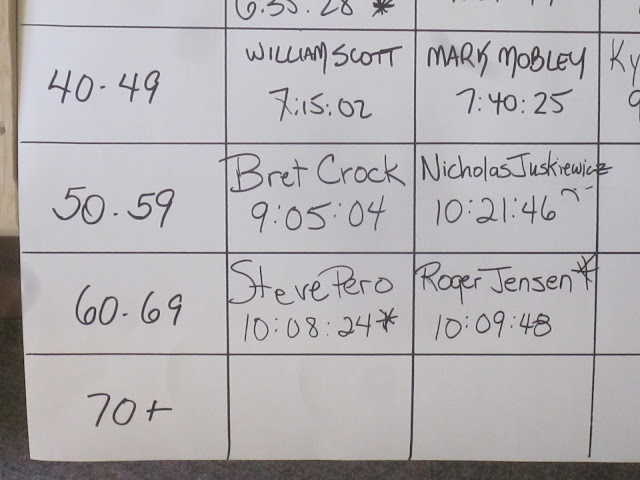 The results board showing our times. The asterisk shows we both set a new course record.

It was a good race, but harder than I have run in years. Roger was fine competition and I only hope I don't have to tangle with this guy again because he'll not forget this day. Thanks, Rog for the push!

A little bit after I finished, I had heard that Deb had cleared all the cutoffs and was on her way in...and in she came! She said she had a good day, but didn't enjoy running just ahead of the cutoffs. She finished 2nd in her age group to the very tough Susan Gebhart, who finished several minutes ahead of me. They are both 57 year's old....not too may 57 year old women could do what they had just done! 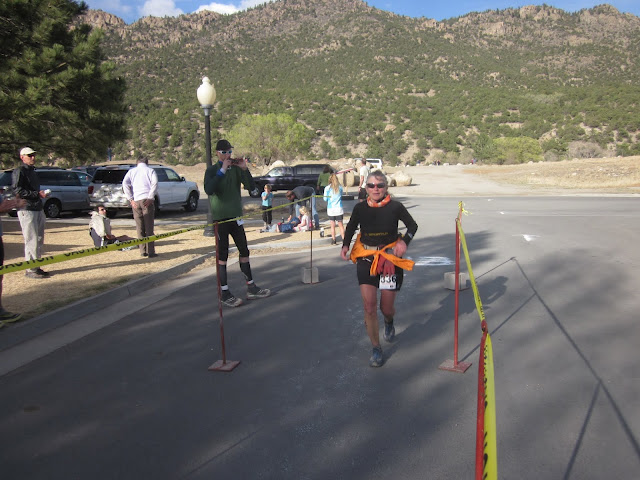 The cutoff grim reaper chased Deb during the 2nd loop, but she beat him to the finish

OK, so another one in the books. Our next race is the San Juan Solstice 50 in late June, Deb's throwing in the Jemez 50K for training and to get the finisher's pot (no, not the kind you smoke). Then after SJS50, we bring it all down for the Hardrock 100 in July, our numero uno "A" race. Our plan is to run it together to celebrate our 10 anniversary of announcing our engagement at the Virginius (now Kroger's Canteen) aid station in 2001 (2002 was cancelled due to a forest fire).

My shoes, the Montrail Rockridge, worked great. The fueling, as I had mentioned, was only gels and water and everything went great. Thanks to all the volunteers for their hard work and siting out in the sun taking care of we runners and a huge thanks to Roger Jensen for having a little bit of a low spot in the 2nd loop ;-)

Until next time...Happy Trails!
Steve and Deb 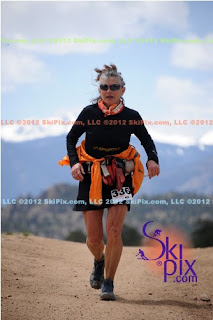 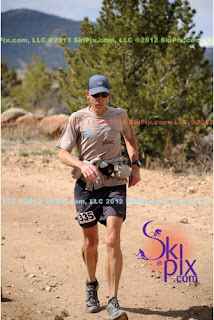