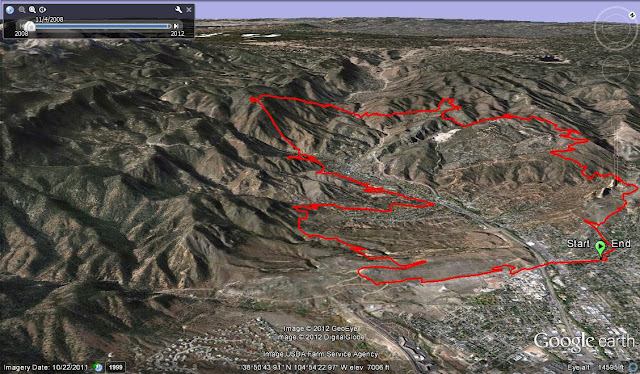 Bird's eye view of the course
Thanks to Brandon S blog

We had heard about this run from some friends and decided to make a trip up to Manitou Springs, Colorado to enjoy the surrounding Pikes Peak area trails. We made the plans and Garry Harrington invited us up to stay at his and Nancy (Hobbs) house, which we did, but because we had to go home to be there early to enter San Juan Solstice 50 and bottle my first beer batch, we did just that, getting home around 1am, staying up to unwind until 2am, then getting up at 6:30 to warm up the PC to be one of the first to get into SJS50. (What a crazy sport this is).

After a wonderful dinner at Garry and Nancy's fave Mexican food joint and several brews, we hit the hay for the 5:30am wakeup. We arrived at JT's house, who was the host of the run, around 6:45 and we were running down the road a little after 7 with a large group of what seemed like 50 runners...and this was only the 7am group, there was also going to be an 8am group start and a 9am start. 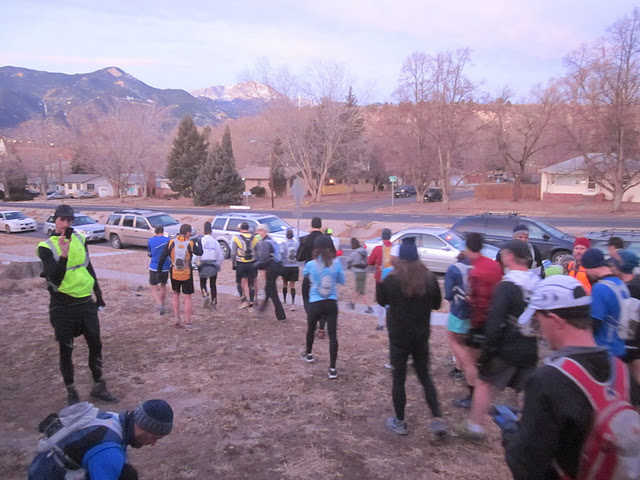 7AM runners starting
Heading to those mountains in the distance

The course was basically the Red Rock Open Space, the Intemann Trail, Red Mountain, the Incline, Longs Ranch Rd, Waldo Canyon, Williams Canyon, Rampart Range Rd, and finally the Garden of the Gods and to and from JT's house. 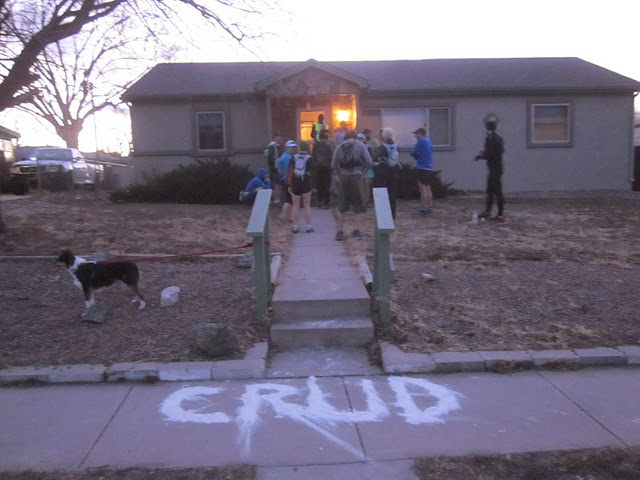 Our plan was to take out time and just run by a low HR, I wore a monitor and tried to keep it around 130 all day and Deb just stayed with me or I with her, however you want to look at it. This wasn't a race, so why hurt? Our first race will be the Salida Marathon in March.
Joining us all day were Kevin Z. and Garry H., both who also wanted to have an easy training day. It was a fine group and at times we split up (like on the Incline), but most of the day we just ran or hiked together.

Early on were some nice single track, which was icy in spots, but mostly dirt, rolling trails with great views. Garry gave us the tour of where we were and what we were looking at in the distance. "See that brown scar on the side of that mountain in front of us? We go up that" Was an example of Garry's tour. 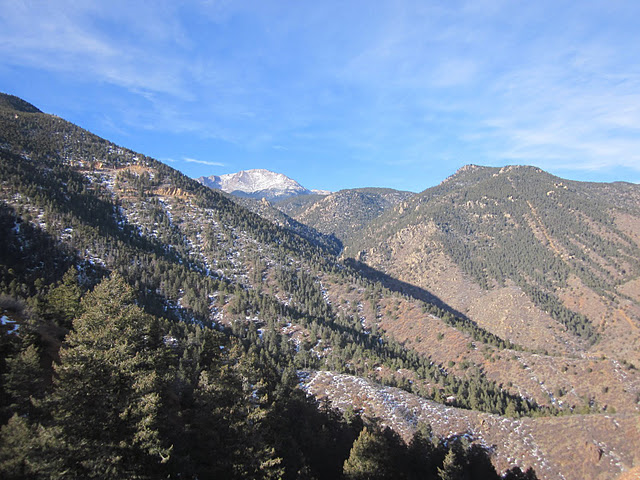 After the trails, we ended up running down a road into Manitou Springs, where I was sure we lost the course, but we then saw a marker which lead us into the cemetery. Through the cemetery and onto some more great single track trails that were even icier than earlier. We had traction devices, but opted to not put them on as the patches were sparse. 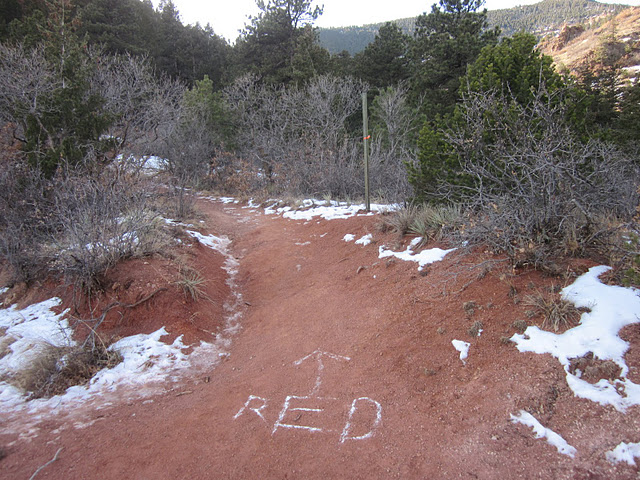 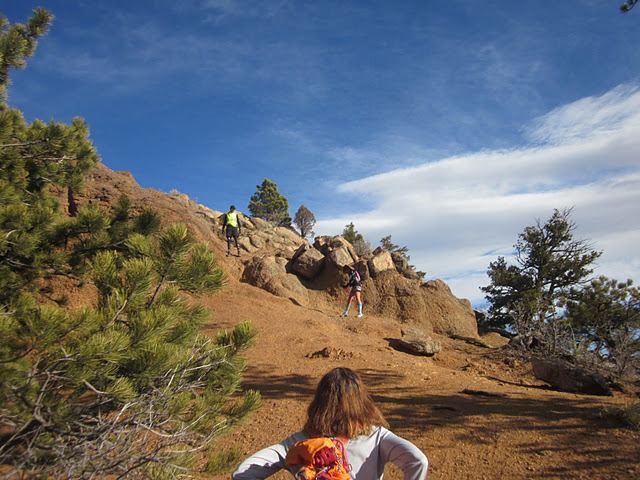 A left turn up the OaB to the Red Mountain summit was nice and then dumped as at the bottom of the Incline. The 8am group was summiting Red as we were heading down and they caught and passed us for good at the road leading to the Incline. 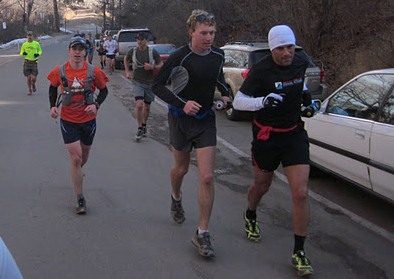 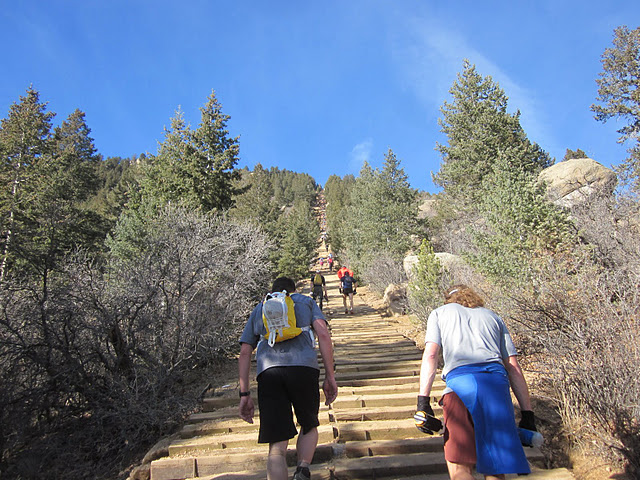 Looking up the Incline

OK, this deserves a section and mention of it's own. We had heard of this infamous climb and even set foot on it many years ago, but had never done the whole thing. WOW! I wish I had this in MY backyard! Hardrock would be a piece of cake....I can see a Sunday after a long run spending all day going up and down this beaut. 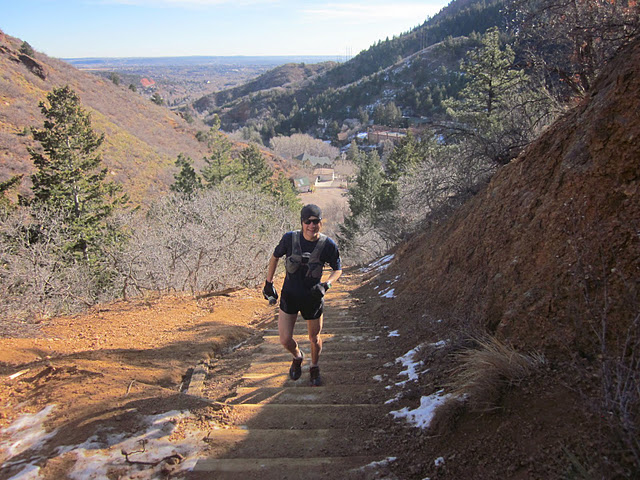 Brandon T. coming up behind us

I began easy with Deb, then Brendan T. caught up to us and I latched onto him as we talked about things. Looking down and seeing 160bpm on my watch made me realize it was time to let this young pup go and settle back down to where I wanted to be....but hey, Deb and KZ are way behind now and Garry is about 100 yards ahead, lets see what I can do this in! So I began cranking up....never caught Brendan again (well, of course not!), but passed by runner after obese hiker after dog and as I neared the top went by Garry, but he jumped onto my pace and we touched the top together in about 35 minutes. Garry said this wasn't bad for someone who had never done it and at age 60. Let's just say I'd like to improve my time... 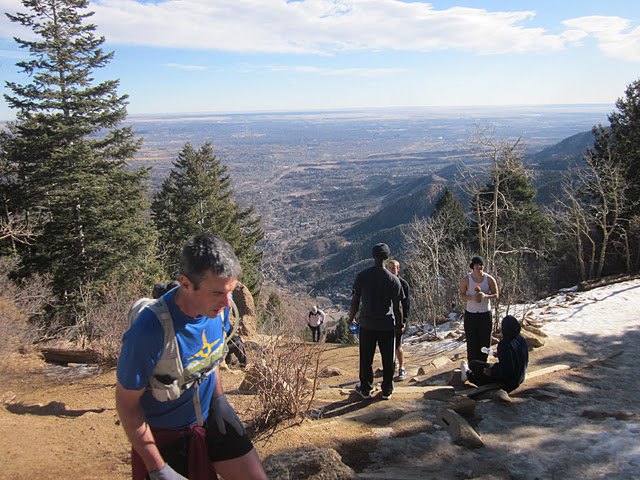 Garry (blue shirt) right behind me 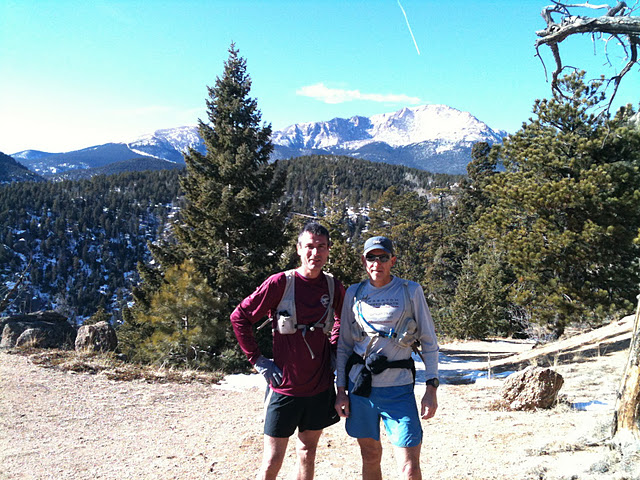 At the top we waited for Kev and Deb to summit and we continued on up and up, then onto some real snowy trails/roads. This was my least favorite part of the day as we run in snow all the time down in NM (we live at 8200' in the Jemez) and I cam "North" to get away from the snow! ;-) 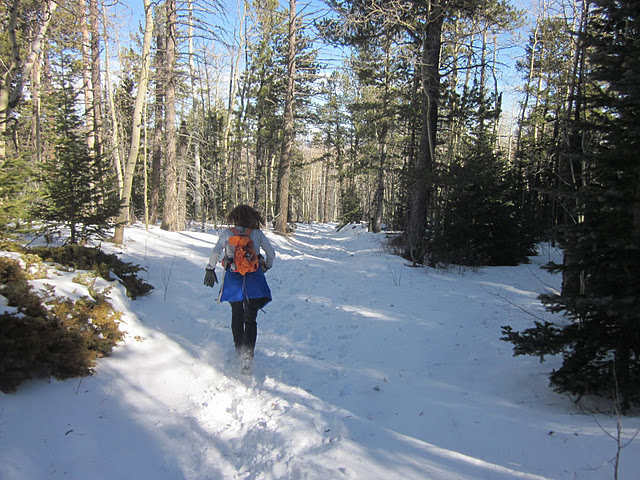 Deb running up ahead in the snow

Anyway, this brought us down to the aid station and because we were so freakin' slow, the water was gone, luckily we wore our backpack hydration and still had plenty....good thing it wasn't a hot day. Next year I'm bringing some water to add to the station, I should have done that this year. 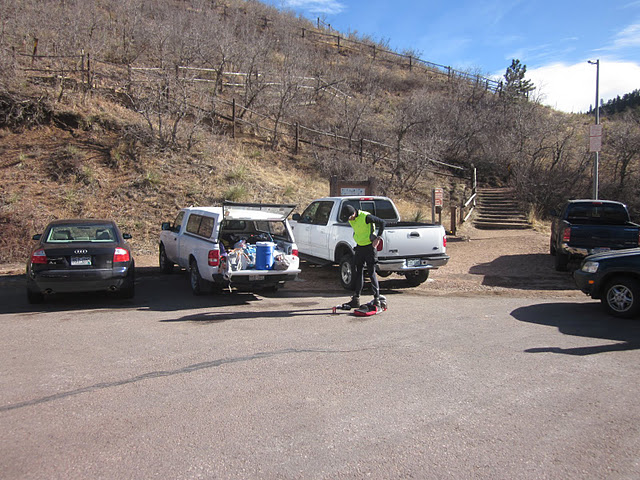 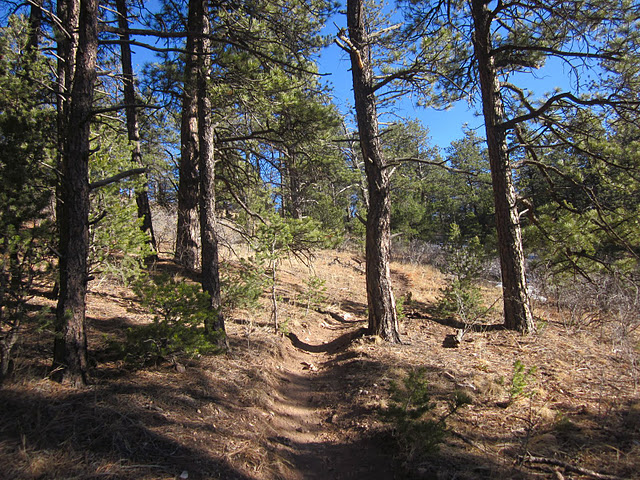 Some nice single track coming out of Waldo Canyon

The Waldo trail was nice into Waldo Canyon and (I think) Williams Canyon and eventually we popped out onto the Rampart Range Road, which Garry told us we took all the way down. I forget what time it was, but I think it was 7 hours into the run and we needed to pick up our dogs from the kennel before they closed, so Deb and I agreed that I was to hammer down, go get the dogs and meet her back at the house. Garry came with me and KZ stayed at the more comfy pace. It felt like we were in a race, running at what felt like top speed forever, Garry right on my shoulder. At times he'd go ahead, then I'd take the lead, faster and faster until we reached the bottom....and saw no markers. Hmmm, must have missed a turn! Luckily Garry knows the area and I followed him through town to the wrong end of 31st street and to the house in 8:54. I went and got the dogs and only minutes after I got there, Deb and KZ came running in "the correct way" in 9:21. 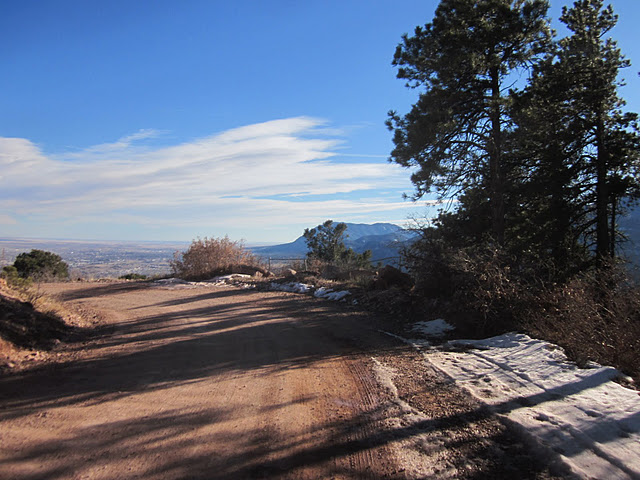 Rampart Range Road
Downhill for about 6 miles at a 7 mpm pace...

Fat as means no entry fee, no aid, no course marking and no awards. We had all of it...
No results link, but here is the host's blog post
Here is another write-up...
Here is a link to the rest of my pics...

It was to be a whirlwind night, no time to have a beer, maybe next year the run won't be the night before SJS entry ;-) We drove back to Garry and Nancy's house, showered quickly and were at the local McDonald's to fill our bellies with Angus burgers and shakes. I also got a super huge Mountain Dew for the caffeine to keep me awake for the 5 hour drive south back to the Jemez.

A huge thank you to JT and his many volunteers for the course marking, it was better than most races. Next year I'll be more prepared and bring water and maybe a box o' Joe of the house. Hope you enjoyed those Santa Fe Brewery Java Stouts! ;-)

Now for the sponsor bit...
Ran in the La Sportiva Crosslites and drank mucho EFS Liquid Shot...as a matter of fact other than 2 tiny Snickers, all I had were gels and felt great all day.

Up next, possibly the Durango fat ass 50K on Feb 4th and then onto the Salida Marathon in mid March.

Until next time, happy training!
Steve (and Deb)
Posted by Steve Pero at 4:11 PM 9 comments:

Based on the news Deb and I got yesterday that we are back on the Wasatch Speedgoat Mountain Racing Team roster, I am bringing this blog back to life...for the team and sponsors, of which aren't nailed down yet, other than Backcountry.com, which is a sure thing. I'll update the sidebar when these get nailed down. 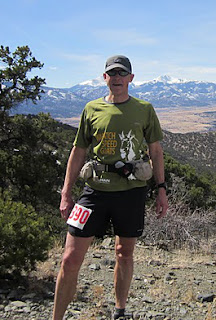 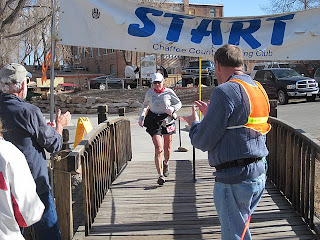 Back in the goat skin for 2012
This is at Salida, Steve mid race and Deb winning her AG

The posts I publish will be mainly centered around the races we run. Deb's about to have some shoulder surgery, which will take her out for a little bit, but not for long. She should be ready for these.
As of now the tentative schedule is:

That's it for now and will probably be it, depending on which ones we get into...after all I am now 60 and Deb will be 58 in August! Sprinkled in there here and there are the many NM MTNRNR trail series, which we will either RD or run as training.

Glad to be back and here's wishing everyone out there a fantastic 2012 and that you get into the races you want to get in!
Steve and Deb 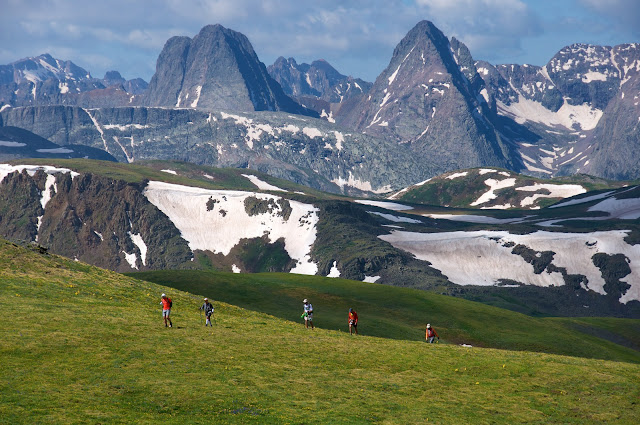 Steve at Hardrock
4th in line with orange WSMRT shirt on
(photo by Jason Halladay, this is the 2012 finisher's poster print)
Posted by Steve Pero at 2:09 PM 6 comments: