Yes, this is it....the big one, the race I wait to see if I get in before I decide on my races for the year. In yesterday's lottery, I got in and Deb is #28 on the wait list, which doesn't insure an entry, but it's highly likely.
I have gotten in the race after being on the wait list around #40 several times. One year (2003) when Deb was around 48th on the list and I was in the top 5, I asked Dale to move me down in the list with Deb so that either we both get in or not, which would decide whether we make the trip out. I completely forgot about the race and didn't follow what was going on, when Dale sent a message out to the Hardrock email group that soon we will be getting together and how much he was looking forward to it. I asked him to stop rubbing it in and he said "What are you talking about? You and Deb are next to get in!" In shock and just 3 weeks before the race we bought air fare and got in the day we arrived. That year Deb finished and I got taken out by the incredible heat we had that year.
All you need to do is look around this blog and you will see what Deb and I feel about Hardrock. We were engaged officially up at 13,000' at the Virginius Aid Station, now called Kroger's Canteen. 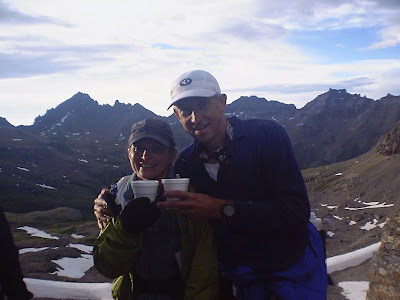 The Toast with chicken broth at the Virginius aid station (2001)
So this is it, 2010 is all set...All races will point to a Hardrock finish in July. Generally beginning in April, I will run a race a month, starting with a 50K and building up the distance to where I race a hard 50 mile effort in June. All depends on where we're living....out west, it'll be some race at some altitude, back here, most likely the Peaks 50 in Vermont, which I feel helped me get a Hardrock finish in 2008. 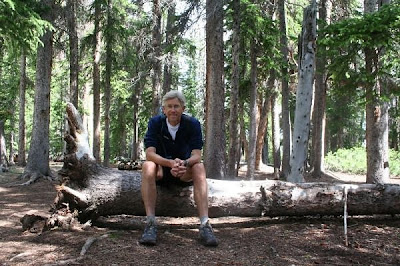 I am always happy when I'm on the Hardrock Course
this is up above Cataract Falls during course marking
Our schedule is taking shape and it's supposed to begin with the Reverse Ring 71 miles on the Massanutten trails in Virginia in 3 weeks, but the word is that there is several feet of snow up on the ridge and the RD's can't say yet what is going to happen. We are also planning on running the Bear 100 in September, but that's a long way off. We are hoping we sell our house soon, so we can get back living at altitude in New Mexico to help us better prepare by running the MTNRNR series of unofficial races each week. If not, we'll run the usual DRB 50K in April, May is not set yet but we'll find something, possibly the Hump 50K in PA, June may be the PP54 as I mentioned above, then we travel to Colorado for the course marking and acclimating. 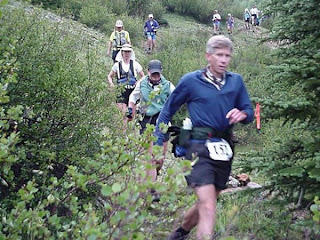 Me and Deb coming off of Nute Chute in 2001
I am planning on training harder than I ever have for this year's race to get that valuable point for next year's lottery and because we will be there, we'll do the trail work to get yet another point. That would give me five points and Deb, four. Notice I am already planning for next year's lottery, this is a year long event in one form or another!  I secretly would like to train for a sub 40 hour run, which I know I can do and I'm not getting any younger so this might be the year. I've just got to be mentally ready to abort that and do lots of walking if I run into trouble during the race....especially if it's hot, like it has been most years. 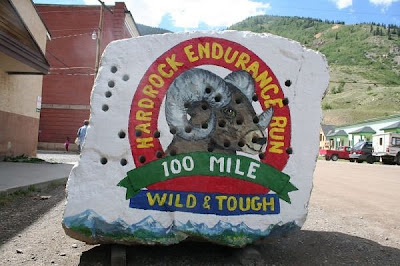 Can't wait to kiss this in July!


So that's about it, I just wanted to jump for joy publicly! :-)

'til next time (possibly the day after the Reverse ring on Feb 26th,
Steve
Posted by Steve Pero at 7:17 AM 7 comments: