Yes, Speedgoat...that is the one and only above
This year because Deb and I now live in New Mexico, we decided to run the Speedgoat 50K at the Snowbird ski area in Utah instead of the usual MMD50K that we run this time of year. Deb had run it last year because she moved to NM sooner than I had and raved about it. I had my doubts and was convinced that Speedgoat was not the "Toughest 50K in the country" that Karl Meltzer proclaimed. MMD had to be, after all I had finished tied for 2nd at MMD last Summer with Howie Brienan in a time of 12:24 while Deb finished in the back of Speedgoat 2 hours quicker! 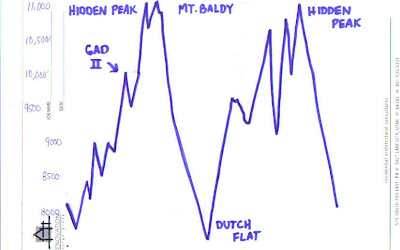 Profile of the Speedgoat 50K
Well, guess what? Speedgoat wins! I have run (and am the only one) to have run 6 MMD 50K's, where the course is tougher every year. The name says it all More and More Difficult....but enough of that run (hike), let me get to the subject of this post.

Speedgoat is tougher than MMD! Yes, I said it and told Karl at the finish that I was wrong, his race is more difficult and the only way I can explain the faster time is the 5 mile downhill runnable sections and the reason I am so sore today! Runnable? Well, if you don't mind picking your way through fist and head sized boulders that are strewn about the road.

The climbs at Speedgoat easily match the hardest I've ever climbed and this includes Hardrock. You not only have the long and steep climbs, but also the altitude as this run goes up over 11,000 feet twice! On top of that we had the snow to deal with, which was tough to get up, but fun going down. 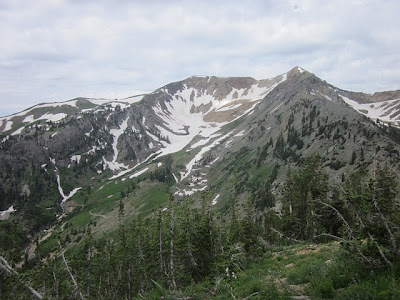 Typical Speedgoat climb
On to my race...I started in the back of the pack with my New England friends, Michelle and Kevin to insure a slow start. Not knowing this course, I didn't want to be brazen enough to start out running at a quick pace, then die later on, so we started out hiking, then slow jogging until we reached the first climb.

The course is designed to allow some thinning of the herd so that we didn't get stuck behind a congo line of runners. 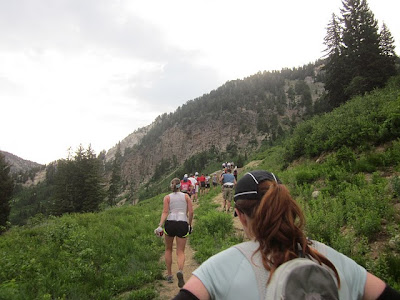 Not too bad a conga line
We seemed to climb forever and it felt easy to me, so I hiked past many runners who were not having it as easy. We soon reached the snowfields, which were soft enough to get some good grip with my LaSportiva Crosslites, while watching all of the Hoka wearers, slip and fall. I clawed my way past them and was soon in the Hidden Peak aid station at around mile 7.7. I didn't bother with how long it was taking me because I had no idea where I should be when because this was my first Speedgoat. I just moved at a comfortable pace and made sure I was draining at least one bottle between aid station and eating a mouthful of EFS Liquid Shot every 45 min's to an hour to keep the head in the game. 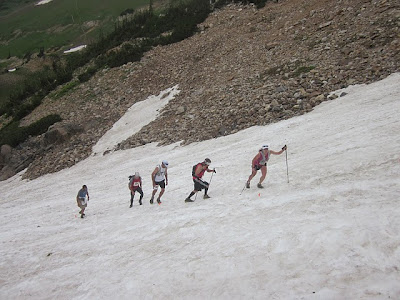 One of the steeper snow sections 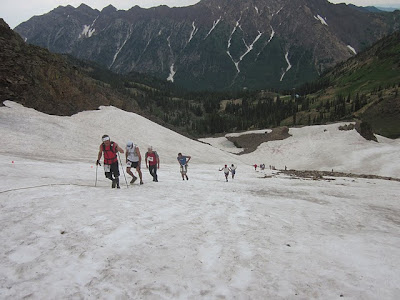 Runners (hikers) coming up behind me 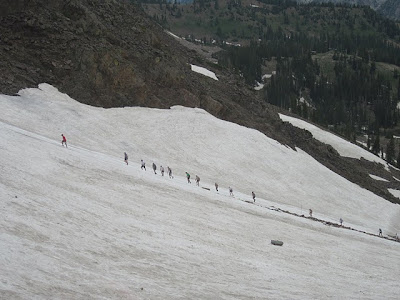 More coming up behind me, showing the steepness of the snowfields
After checking in at the aid station and drinking a cup of Coke, we blasted down the hill to Larry's Hole at 9.9. Because it was all downhill, I barely touched my water, so just ran through making sure to check out. 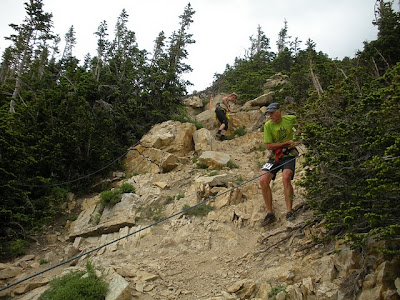 That's me coming down one of the gnarlier downhills
So steep we needed a rope!
Pacific Mine was next at mile 14.4, which was Roch Horton's aid station and this one was the winner. We were all weary after the near 4 mile downhill run on boulders. On the short road into the aid station, I did a gel, followed by some Gu Crumbles and it picked me up enough to allow me to run almost all of the slightly uphill road into the aid station. It being an out and back, we saw many of the runners ahead of us. Some looked tired, while others looked great. 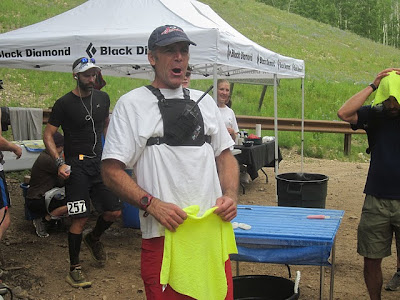 Roch Horton, captain of the Pacific Mine aid station
Once there Roch said hi and placed an ice water cloth on the back of my neck while I ate some watermelon. He had Popsicles there, but I passed not wanting to dump all that sugar in my stomach after the Gel and crumbles I just ate...I was trying my best to not get sick, which always seems to happen to me in races. I also made sure to grab a Saltstick cap in most of the aid stations I passed through. 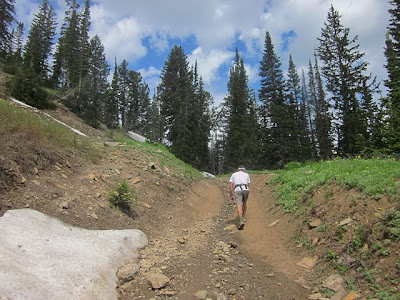 Cody climbing up ahead of me towards Larry's Hole
It was warm down in the aid station and now we had a really long and sometimes steep climb back up to Larry's Hole at mile 19.4. The 5 mile climb actually seemed easy, which I shared with Cody from Logan and I made sure to eat on the way up. I went through more gels at this race than at any other, but it was working. I also drank most of my 2 bottles and refilled one of them as it was only a couple of miles to the next aid station. I also grabbed another Saltstick capsule. 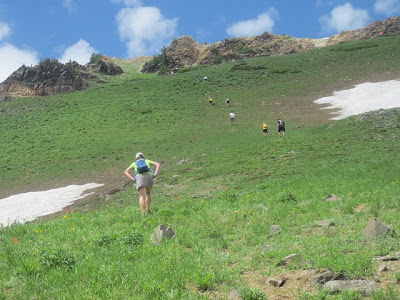 The "Grunt"
Up next was possibly the most difficult section of the course...it was a steep grassy slope with no trail, just straight up. Memories of the Putnam and Green Mountain sections at Hardrock were all I could remember doing anything like this. What a grunt up it was...I could feel things in the back of my legs stretching beyond where they had been stretched before. The calf muscles were burning and my lungs were filling and emptying really fast as my body screamed for oxygen at this over 10,000 foot elevation. Once at the top, we got on a nice runnable trail but there was no way I could run, so I hiked along, even the downhill across a snowfield and then up to the Tunnel aid station at mile 21.5. 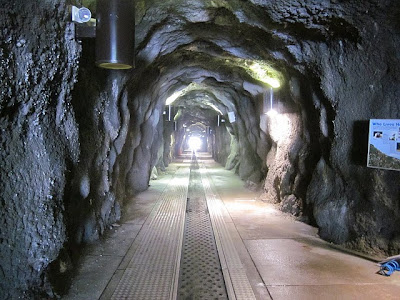 Looking into the tunnel before running through it
Standing before the Tunnel after getting my bottle filled and eating some more fuel, I took inventory of how I felt and realized I felt pretty damn good with 10 miles to go! As I entered the tunnel, Bryon Powell of irunfar was sitting in the cool shade taking a short break. Bryon has had an incredible summer, running a sub 20 at Western States and then training and pacing at Hardrock during the past three weeks and knowing that he had UTMB in France coming up, was backing off wisely.

I told Bryon that I felt good and it was time to try and make up some time from the climbs and outside of the other side of the tunnel I couldn't find any markers and while standing there Bryon came along and spotted them down the hill and around the corner. Karl, you need some flour arrows there. Bryon and I ran down the road from the tunnel, which had recently been plowed. 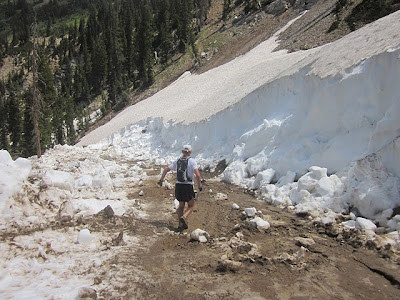 Again I left Bryon to make up some time and started picking up the pace down the hill, mindful of the course markers. I didn't want to go off course now! Spotting the course markers taking a left off the road, I followed them through the woods and onto the trail that would take me along the ridge back up to Hidden Peak.

It was getting hot in the sun now, but I still felt good. I think doing some training in Albuquerque in the mid 90's since early June has helped and I soon went by a couple of guys that were struggling up the trail. One guy was screaming in pain, sitting on the trail from cramps. This is a tough race! 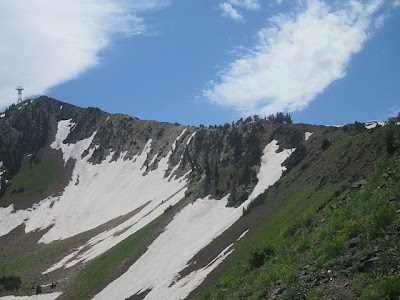 The ridge to Hidden Peak
The trail went along that ridge-line to the top
On the final climb up to the aid station it was a dusty single track trail, which was causing the front of my shins to cramp a bit. I think this was due to fatigued muscles and not electrolytes, but to be sure and to make the run down as fast as possible, I ate 2 caps and drank 2 cups of Coke once I got there. This was the last aid station, Hidden Peak at over 11,000 feet and mile 26.5.

We now had 5 miles of downhill to the finish. I looked at my watch and saw 1:47, which was 7:17. If I could get down in 45 minutes (9mpm), I'd be able to get in under 8 hours...but I forgot about the snowfields, which were a lot softer now and also didn't really know what to expect once down in the trees, near the finish. 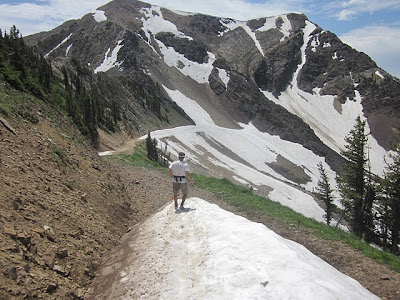 Starting the run down to the finish with Cody ahead
I started to run down hard, right behind Cody and with Troy behind me. We reached the snow and ran through it the best we could and glissaded down the two steep pitches. I stopped to get a great shot of Troy glissading behind me. 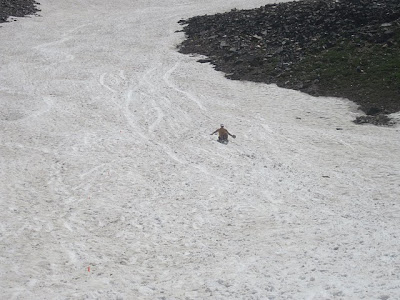 Troy behind me glissading down the snowfield
After the snow and a couple of trail sections, we had a great road to run down....I ran as hard as I could and went by Cody and Coni from Switzerland and a runner she was with. I had been back and forth with her all day long. Troy went flying by me and that was the position we held. It was defeating once down below because what I was hoping for was a direct run into the finish, it wound around, up and down through the trees while listening to the crowd at the finish cheer when runners came in. My legs were now shot, but I did all I could to keep running, not wanting to look at my watch. After all, what difference did it make? I was sure I wouldn't break 8 hours and once I crossed the finish line, Scott Mason said "Baaa" and Karl put a medal around my neck, then pointed to the cooler of PBR beer.  I asked my time and Scott said 8:07. Official time is 8:07.53 in 63rd place. There were 297 entrants and 188 finishers, so I felt good about my time and place. One of my goals in races is to not have anyone older than me in front of me, which I succeeded in doing. So next year I hope to get in under 8 hours at the age of 60... 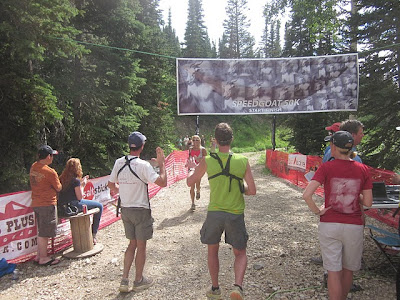 Karl and Scott about to greet my friend Michelle from Ma.
This is a really well run race and great course, it is my new favorite. My fave until this was the San Juan Solstice 50, but I actually think this one might be harder! As I write this I am contemplating whether I'll be able to run today on my still sore legs...it's Tuesday, 3 days since the race and I'm still sore! Awesome!

To see the rest of my pictures, go to this link. https://picasaweb.google.com/ultrastevep/2011Speedgoat50K#
The results can be found here: http://ultrasignup.com/results_event.aspx?did=11805

Now it's time to start thinking about the next race, the Bear 100, which is 7 weeks from Friday. I plan to spend a couple of weekends in Silverton, Colorado doing some training on the Hardrock course to get some finishing work for the Bear, then will start to back off. Deb is going to do some grandchildren visiting in TX and NH, so it'll just be me and the dogs.

So until next post, happy training!
Steve
Posted by Steve Pero at 1:19 PM 5 comments: