Because I have been in Texas the past week and a half, I haven't been able to post my usual running summary post until now. After just viewing AJW's post on his mileage I thought I'd write this short summary of 2009. 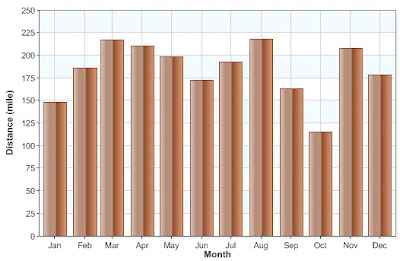 I finished up with 2208 miles for the year, which is an average of 42.5 miles per week, which is about my usual mileage. My goal is always around 2600, which is an average of 50 mpw, but there are always setbacks here and there. I guess in order to hit that number, I'll have to run more 70-80 mile weeks. Deb's training is a lot like mine, but due to her art responsibilities, she probably only gets about half of what I reach. She's not as anal as I am about getting a run in every day of every week. I like to run every day (if i can) and most of it at a low heart rate or easy conversational pace. I like to begin hill repeats in March on a hill that takes about 1.5 minutes to crest at a very fast pace, maybe about a 5K effort. I'll do that for about 6 week, starting with 6 reps and building up to 12. Sometimes I keep those up well into May, sometimes not. It's all about Hardrock and what will better prepare me and then be able to recover from.

After those, I start the tempo runs, which are simply inserting a 20-30 minute pickup in the middle of an hour run. I'll do that once a week, usually 2-3 days after my hills. The prep for the race period in the summer begins by first dropping the hills, then dropping the tempos a couple of weeks before my first race. Year round I like to insert short 30 second pickups into my runs several days a week.
I like to log my miles on Running Ahead because of it's ease of use and data it provides.Here is a summary page from my log, showing all the days I missed while in Texas and before when I was fighting a cold. 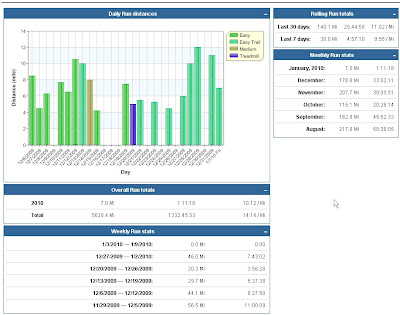 I have tried logging my miles in Daily Mile, but the social side of it turns me off a bit. I'm not anti social, but having people commenting on my logged run for any day seems kind of weird. Maybe I'm weird ;-)
I plan on checking out Attack Point, which is what AJW and several others use....but I'll probably stay on RA, where I've been now since 2006.

Now the list....
What was the worst experiences I had?
#1 Not getting into the Hardrock 100. This is my race....it is what the whole year revolves around. Deb got in, but because I didn't and we were trying to sell our house, we didn't even go out to Silverton. That was a real bummer.
#2 Not finishing the Bear 100.
It was really hot and I got sick. After puking from mile 30 until mile 51, I stopped. Shouldn't have but I did. I was a wimp that day, but Deb wasn't as she pushed through the heat to a 33 hour finish at 56 year's old.
#3 Running the Cigna 5K road race in Manchester, NH. with 4999 other runners on a hot and humid day in August. The only bright side was that I finished first for my company team in 20:06 at 58 year's old.

Best experiences?
#1 Course marking at the Massanutten 100 in May. Especially when Karl Meltzer began to catch up to us and we had to race to keep ahead of him.
#2 Pacing my friend Bob Dunfey at the Vermont 100 in July. It should have been Patty Duffy, but her injuries prevented that from happening. Bob asked when he found out I was available and I agreed. I hope Patty's injuries are getting better and she can return to the fine running form she was showing last Spring.
#3 Working the finish line at the Wapack trail race in June.
#4 Running the Pack Monadnock 10 mile road race....it has one hill, but it's many miles long and runs to the summit of Pack Monadnock. It was fun seeing many of my old Cambridge Sports Union friends that I hadn't seen for many years.
#5 Beginning to see results from the Pose/Chi running style. A knee injury I've had for over 25 years is finally going away!

So that's it....for 2010 I have 3 wishes.
#1 That our house sells so we can get back to New Mexico
#2 That we both get into Hardrock.
#3 To continue my training and attempt to maintain my running fitness as I get closer to the age of 60.
#4 That my marriage to Deb continues to grow stronger every day.