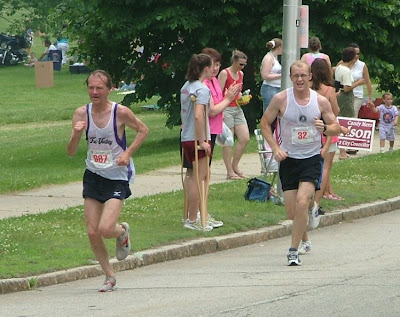 Like many are doing this week, I am writing about Larry Olsen, Larry the Legend....or just Larry as we knew him here in the New England racing scene.

Larry passed away this past Sunday doing what he loved, running with friends in his Tri Valley area of Milford, Ma. You can read the whole story here in a fitting memorial article by Mario Fraioli, who just wrote a profile piece on him in that same magazine, Running Times.

Here is the Boston Globe obituary

...and a discussion on Letsrun with respects from some great runners like Amby Burfoot and Bob Hodge.

Larry is one of those who you just expected to always be there....always be toeing the line. I met Larry back in the 80's when one of my training partners was one of his rivals. Bob and I were at the Newburyport 10 miler in the early 80's and I asked Bob, (who was one of the top masters in the area) what he though about his upcoming race....his answer was almost always "Larry's here". Which most times meant he was not going to win his age group.

Larry was 5 years older than me and I never, repeat...never finished in front of him. And I was a pretty good runner myself back then, having run 33 minute 10K's and 16 minute 5K's...Larry was not only a good runner, he was a really tough competitor, which is what usually pushed him ahead of whoever he was running with. 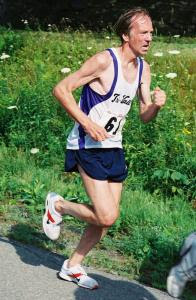 Deb even has a connection to Larry. When she began running in the late 90's while living in the Tri Valley area, she ran for the Tri Valley Frontrunners of which Larry was the creator and coach. Larry guided Deb to her first Boston marathon finish in the late 90's. She told me that she bought her first pair of running shoes from Larry at his running shoe store, the FrontRunner in Milford, Ma.

Larry, hope the races are as good up there as they are down here....run on in peace.
Posted by Steve Pero at 11:03 AM No comments: