Yesterday, Saturday March 10th we ran our first official race of the year. We ran some fat ass style 50K's as training runs, but this is the first one we put money down on and is stepping stone #1 towards Hardrock.

The race is well run and put on by the local running club, but the race director is Jon McManus, a well know artist and Hardrocker. Jon has had his art selected for the Hardrock poster several times. 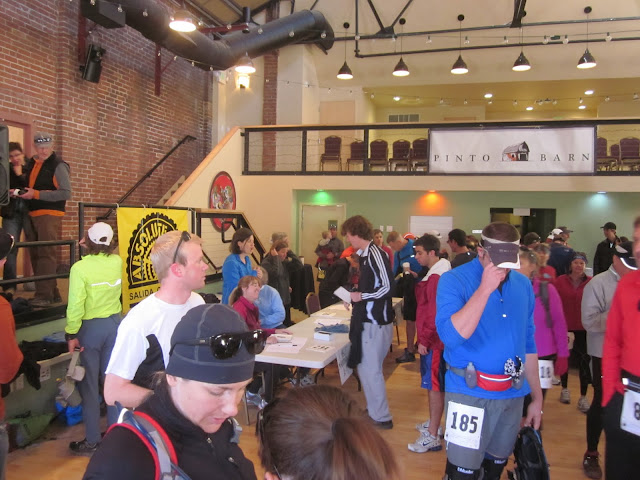 It starts in the small mountain town of Salida, Co. "across the tracks" and runs up the "S" hill on some single track trails, one known as Li'l Rattler. This trail we do out and back as we come into the finish, so the course is a sortof lollipop. Run up the hill for several miles, back down to a dirt road for several miles and the 2nd half is on single track trails up high. The details of the event are as follows: 8 miles gravel road. 8 miles rocky jeep trail/two track. 10 miles narrow singletrack trail. 4750’ of climb, 4750’ of descent. Low elevation: 7000’ High elevation: 9050’.
So if you are not acclimated to altitude, you will struggle here. I live at 8200' and even I was breathing extra hard on the high points and had to slow to a walk. 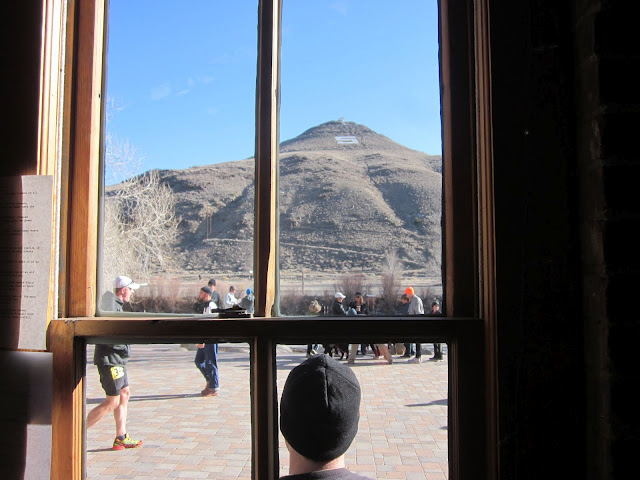 As for my race personally, I had two goals going into it...get under 5 hours and win my new age group of over 60. They don't do prizes here, but I like to finish races and not have anyone older then me finish ahead of me...and most times I am successful. Last year I ran 4:52, but they added the new trail section for the first 8 miles or so, which was dirt road last year, it added 2000' of climb over last year and the conditions weren't as good as last year, so I wasn't hopeful to get in under 5 and said to Deb it'll probably be more like 5:15ish. 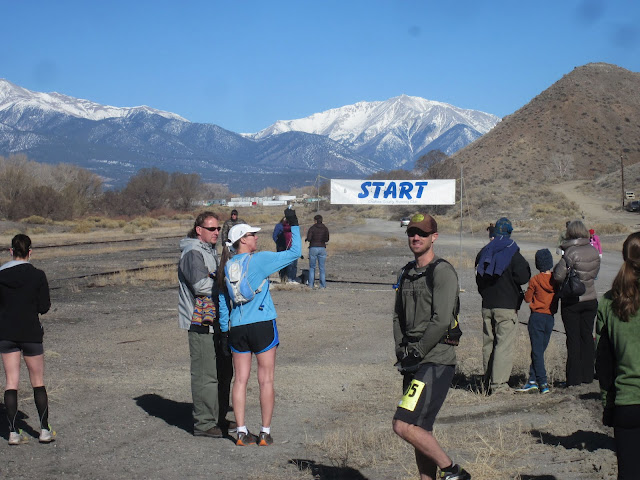 Runners gathering at the start


So at 9am, off we go on a short 2 mile loop before we head up the mountain on the single track. I started slow and easy and it seemed the whole field was passing me at one point, but after about a mile, we settled on a flat section and as I began to cruise and many came back to me. I was concerned about getting stuck behind a conga line and pushed the pace a tad on the 2nd mile and it worked, as I fell in with a group of runners who ran up the mountain trail, so if I walked I'd be the conga line....didn't want that so went with it. Once the half marathoners peeled off, I could relax a bit and do some walking on the uphills to get the HR down. 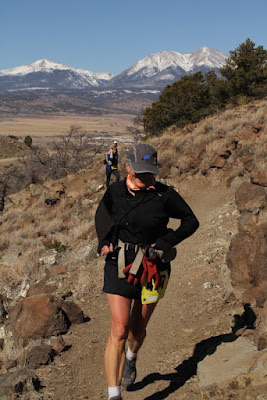 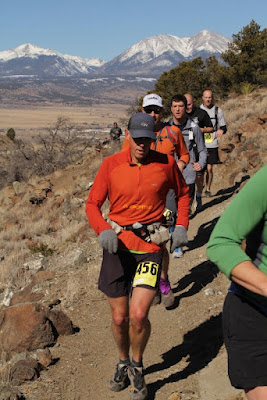 Someone was taking photos at around the 4 mile mark, these are of me and Deb.
Notice Deb wearing the sling 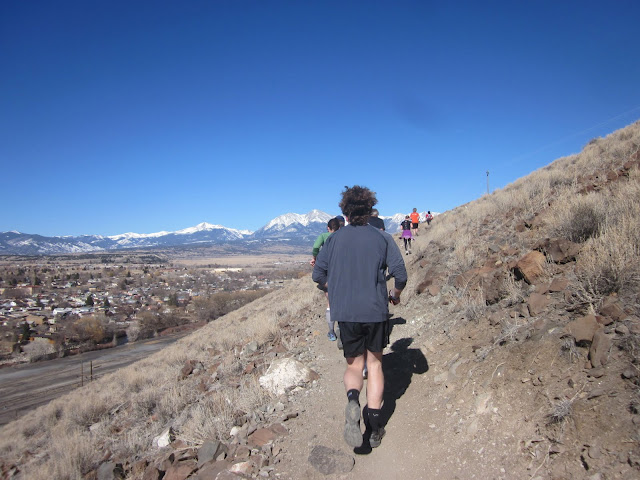 Running up the trail on the "S" hill

After a bit it was me and Julian, a guy who is running Hardrock for the first time this summer. We talked about that and other things but mostly went back and forth as we were on a different walking/running strategy. 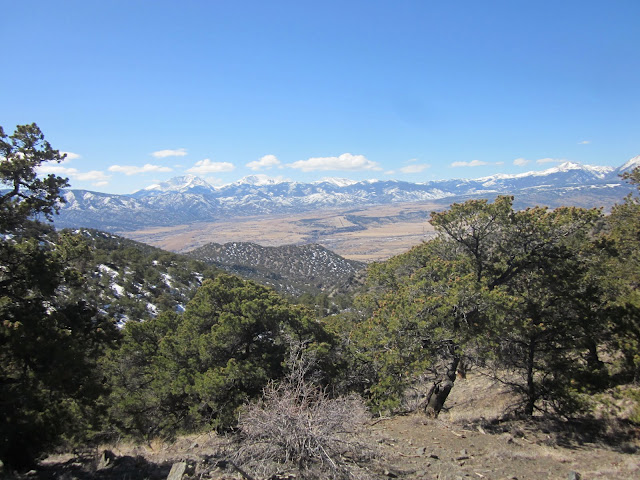 The views all day of the Collegiate Peaks were fantastic

Soon we were at the turnaround which was around 12 miles and I knew then that it was "mostly" downhill from there. Up to this point it was predominantly uphill. Turning around I started my downhilling and started to catch many of those ahead. I ran into Kevin Z. as he reached the aid station at around 11 miles for him and my 13 miles before taking a left onto better and softer trails for the remainder of the race. I was at 2:29 at this aid station, so felt confident that if I could keep moving, sub 5 was a possibility. 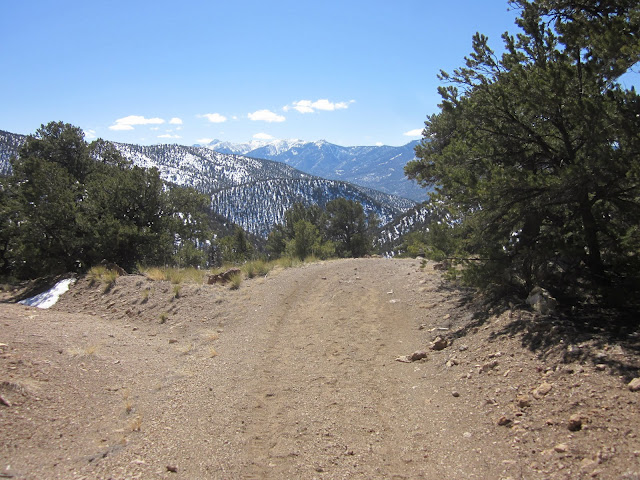 After this point we climbed up to the high point and I was having some breathing difficulties, sortof hyperventilating, so I just backed off the pace until I got it under control. This happened several times until we dropped lower and I could begin to crank it home. This section also had a lot of snow and deep mud for miles and miles. This got to be irritating after awhile, but it's trail running in late winter in Colorado, what can we expect? 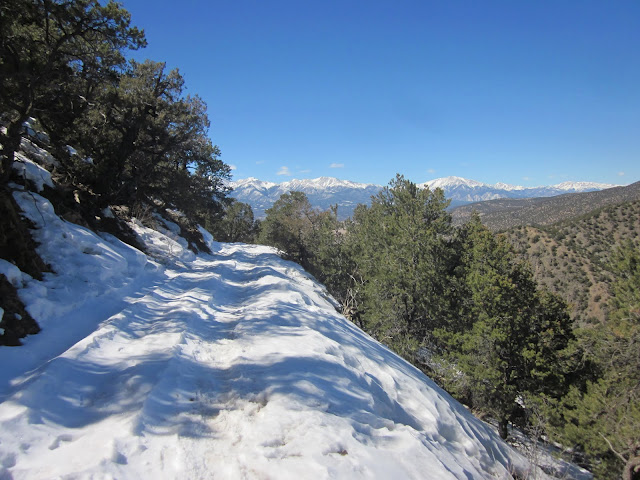 Snow was deep in some areas and at the bottom of the hills, mud

I did mostly EFS Liquid Shot as my fuel and supplemented with a couple of other gels when I ran out of the EFS. I have learned that this works the best for me, to put nothing solid in my gut. Drink water and stay on top of the gels, about every 40 minutes or so and I start energized, no bonking and it also keeps my head thinking right. I never needed salt, even though it got a tad warm in the final miles, but EFS does have some electrolytes in it, as well as amino acids.

Soon I reached the aid station at mile 20...I was 3:46 here, so with 6.2 miles (which turned out to be 6.7 miles) of gnarly and rolling single track, I'd have just 1:13 to get it done. Might be tight, but I'd have no room for error or dawdling. This whole section I felt pretty good, strong climbing....there was one longer hill I had to walk, but most everything else I ran. Somewhere in here I re-passed Julian and he wished me luck. I also went by many walking dead young guys, who I offered all a gel, but had no takers. One guy said to me "I'm way beyond a gel, my legs are toast". I did notice that although I could see women ahead of me on the back and forth snaking Li'l Rattler trail, none were coming back to me, they were all looking strong and picking off guys too. I think women are smarter about pacing... 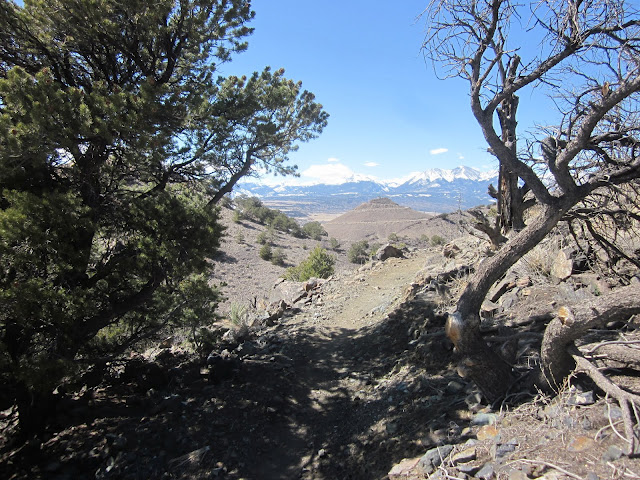 
Final aid station I reached in 4:33...yikes! I asked how far and the woman said 2.5 miles, all downhill. Would have to average around 10 minute miles to get in under 5, but it's all downhill, how hard could it be?
So I got a bottle refilled, had already done my last gel jogging into the aid station and began cranking as hard as I could. I'm guessing in those final 2 miles, I passed about 7 guys, most who just stepped aside when they heard me coming..I guess they knew their day was done. 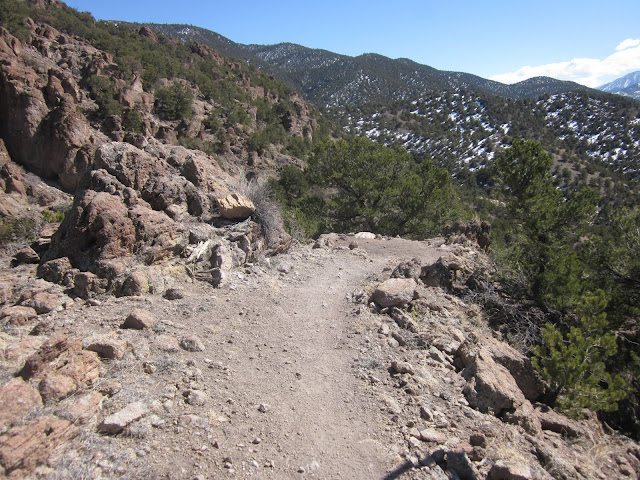 Reaching the bottom of the trail, I ran as hard as I could across the tracks, through the park and down under the tunnel to the finish, looked at my watch and saw 4:58! I just said "Yes!" and walked into the Steamplant and had some soup. Jon then came up to me and told me I was the first really old fart and he had a prize for me, a nice piece of art he created with "First male 60 and over". That made my day, two goals reached.

Our friend Kevin came in around 5:45 for a new trail marathon PB by a lot and Deb just missed taking the over 50, which she did last year...finishing in 6 hours, a little quicker than last year on a tougher course in tougher conditions. She also wore a sling the whole race after recently having shoulder surgery.

So that's it, #1 race went well for both of us and now it's on to the Collegiate Peaks 50 mile in Buena Vista, Colorado on April 28th. My hope there is to try and win my age group and if I have a really good run, set a new over 60 course record of 10:59. I am hoping to run closer to 10.5 hours...so the next 4 weeks I'll be going into a speed phase of training now that I have been running some good slow mileage all winter. Two weeks before Salida I ran a 70 mile week, most weeks were in the 50-60 mpw range. I'll drop my mileage down to closer to 50 mpw, but will add some tempo runs and short pickups/hill reps to try and get stronger and faster.

Here's a nice video that Steve Bremner shot while running a 4:26...

Shoes I wore were the La Sportiva Crosslites for the aggressive sole in the snow. I have a pair of Montrail Rockridges coming that I will plan on wearing at CP50 and to break in for Hardrock.
Fuel most mostly EFS Liquid Shot

Until the next time, which will be April 29th! Happy trails!
Steve and Deb

I just wanted to add to this post a great collage of the Wasatch Speedgoats Mountain Racing Team that was created by Chris Boyack and that Deb and I are a part of. I'm on the lower left grinding up a hill at Hardrock and Deb's on the lower right at the Bear 100 waiting for some cattle to cross so she can continue on. 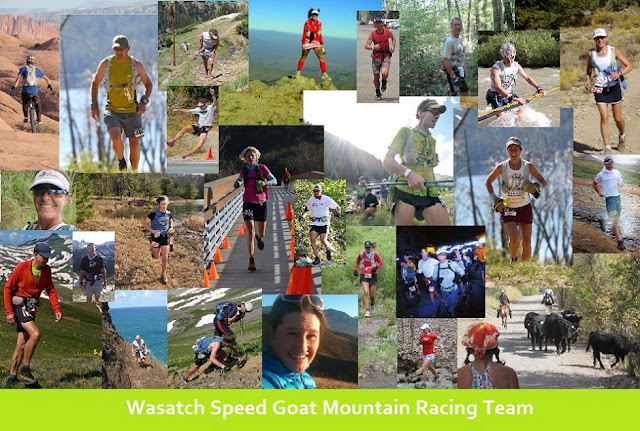