Times, they are a changing and without change we wither and die....

Deb and I ran the Reverse Ring in Virginia this past weekend, well part of it...and it was a tough run, as we knew it would be! 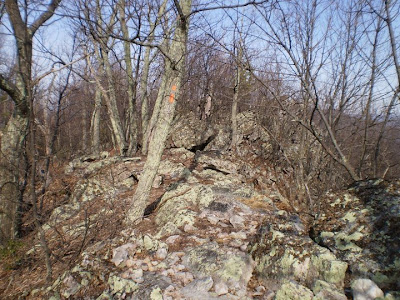 The Reverse Ring is the winter version of the Ring, which is held in September. The difference is possible cold, snow and ice and the long unaided 25 mile section is done at the end instead of the beginning. This event is the 71 mile tour of the complete Massanutten trail, with some aid. Generally on average about every 8 miles you get to meet with the directors or volunteers and have aid that is as good or better than most 100 mile races! Only at the last 25 miles do you possibly have no aid.
This is not a race, but a supposed fun event...a gathering of those that enjoy the Massanutten trail. It also seconds as a great training run if you so happen to be entered in the Massanutten 100 coming up in May.

This year the day dawned cold for the 7:07 am start. It was about 16 degrees, but the trails were clear of any snow and ice, which was great! Deb and I had forgotten what dirt and rocks looked like, seeing as how up North everything is buried under feet of snow and ice.
We started with a good group of about 25 wishful ringers and by the time we hit the ridge, were all warmed up and shedding clothes. The temps during the day were supposed to get into the 40's, but I have to tell you, I never took my gloves off...there was a bite in the wind all day long.

We were doing well when Deb started to get her recurring injury, Osteitis Pubis...which causes pain such that she cannot lift her leg. Very difficult considering virtually every step is hopping up or down from a boulder. We came into an aid station and she took some Ibu's and soon was good to go and pulling me along. I was not having a great day, my legs felt tired (probably from the 50 mile weeks I've been running) and just couldn't get into it. On one long climb out of an aid station she just pulled away from me and I was actually bonking, so did a gel and re-caught her....but on the next climb, some 8 miles later I got my first hint of nausea after doing the gel. We were now on the Gap Creek trail and it was getting dark....but still pushing the pace some and by the time we reached Camp Roosevelt, mile 46 I was done. Having already decided coming in that I was planning on stopping and Deb even asked me that (we know each other so well) and I said "That thought has crossed my mind".
So into Camp Rosy we go and I sat down, wanted to throw up, but didn't and called it a day in front of the warm fire, it was about 9PM. Deb meanwhile was sitting beside me eating pizza, getting her light and putting on warmer clothes for the next 25 mile, possible 10 hour section with no aid. When she heard me say I wasn't going on, it took the wind out of her sails. The thought of being up on the cold ridge alone wasn't sounding too good and yes she could have left with Bill Losey, who had just come screaming in, but she didn't think she could keep up with him and didn't want to hold him back. Turns out Bill found Mike Dobies sitting along the side of the trail and they walked it in together...so she would have been fine....well, woulda-coulda, it's all done now.
Here are some photos I took during the run...
Reverse Ring photos

That brings me to the title of this post! Changes! I have made the long coming decision to no longer train for and run 100 mile races. I am done dealing with the nausea and vomiting...there has not been a 100 yet that I have not gotten sick and I just think I'm not meant to be out there that long. No matter what I try, it doesn't work. I can make it less by not ingesting anything like I did at Hardrock last Summer, but that's no fun either. So I go out on top with a Hardrock finish.

The plans for this year will be to run some races in the New England Mountain racing circuit and the New England Grand Tree series, which I used to participate in before I got into ultras. I'll also work on getting my road 5K time down and possibly a marathon in the Fall. The other plan is to get my house sompleted and ready to sell so we can move back to New Mexico.

I'm not going to quit Ultrarunning....just 100's. I'll race in 50K's and do a 50 here and there after we move back West. My 100 participation will be as a volunteer and to help those new to the sport. I have already withdrawn from the Massanutten 100 and have signed up to do some course marking and anything else they can use me for.