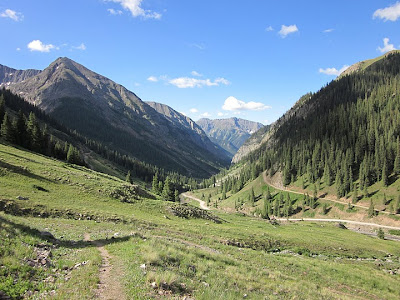 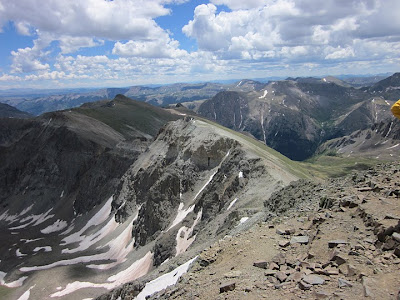 One of the many views from the summit of Handies Peak
In 2001 Deb got in and I was last on the wait list because I didn't have an official qualifier, so Dale allowed me into the lottery because I had paced Sue Johnston the year before over some of the tougher sections of the course. If I remember correctly, I was 38th and got into the race 2 weeks before the start. I finished, Deb didn't. We announced our engagement at the Virginius aid station that year.

2002 no race because of the Missionary Ridge forest fire. 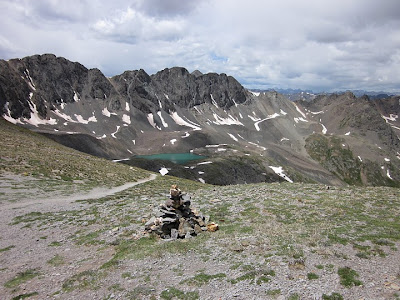 Top of the first climb after leaving Grouse Gulch aid
2003, I was in the top 5 on the wait list and Deb was around 48th. I asked Dale to move me down with Deb so that if one got in, hopefully we both got in. We had no plans on going out, figuring we had no chance...when Dale had sent out an email about a month before to the HRH list saying he was looking forward to seeing everyone. I replied to him saying "Thanks for rubbing it in" and he said back "What are you talking about, you and Deb are next to get in! Deb and I talked about it, talked to work for the time off, booked our flights and when we arrived on the 4th of July, Carolyn Erdman rushed up and gave us both a hug telling us we had gotten into the race! Deb finished, I didn't...

2004 through 2007 I honestly don't remember the details, but one or the other was on the wait list and we always got in, but didn't finish. It was not a good period... 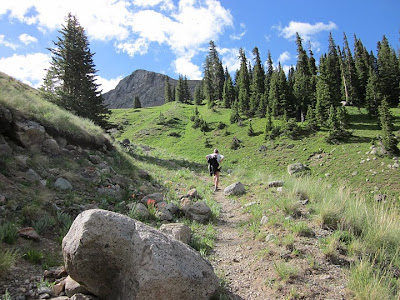 Deb climbing up from Grouse Gulch towards American Basin during last year's run
2008 I got in, Deb was on the wait list...I finished, Deb didn't.

2009 I was 77th on the wait list, Deb was in...knowing that I didn't have a chance to get in, Deb withdrew so we could focus on selling our house to move back to NM permanently. 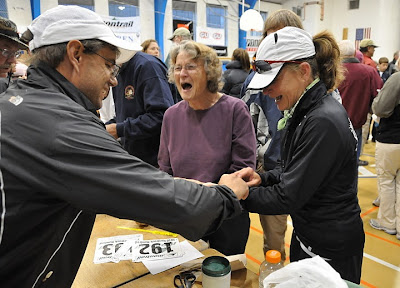 Last year just as Deb found out she was running
All the women were crying, and some of the men!
2010 I got in, Deb was 28th on the wait list...race morning Deb was next in line to get into the race and when it didn't look like there'd be any withdrawals, I withdrew so she could run in my place. The reasons were simple....I had 2 finishes in that direction and she didn't have one. She was in the best shape for Hardrock she'd ever been in, so there was no choice. Deb ran and I paced her from Ouray, unfortunately she got Hyponatremia and was timed out at Sherman around mile 75, not able to eat a thing. I was ready to bring her up into the Pole Creek section of the course, but didn't want to have to carry her out if she collapsed, so the decision was made. 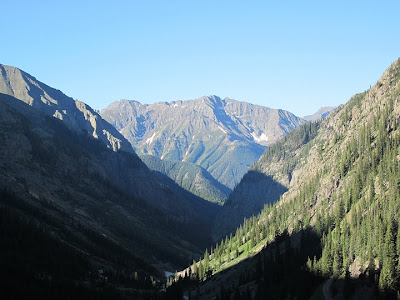 Looking towards Silverton from Grouse Gulch
2011, I'm 23rd and Deb is 25th on the list....history shows that we "should" both get to participate, but this year also saw the largest entry field in the history of the event and with that each slot is much more valuable. I'm thinking that people will be more willing to "try" to run it even if injured because they may never get a chance to run it again. So the wait list may not get eaten up as deeply in the past....I hope my thinking is wrong, because we sure would love to be on the starting line on July 8th! 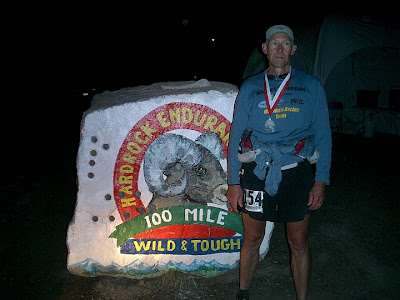 NM State flag...Zuni sun symbol
On another note, I am loving living in New Mexico! I am training at altitude and getting re-acquainted with our old running routes we ran back in 2006-2007. One thing that's making it so much fun is our new family....meet Gibbs and Marley! 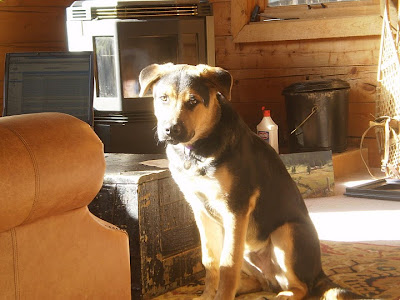 Meet Gibbs....he's a little bigger now
Gibbs is a pup that Deb got at a rescue shelter in Pueblo, Colorado. He was 4 months and about 40 pounds when she got him and now the dog who wasn't supposed to be much larger than 50 pounds according to his vet, is weighing in at around 75 pounds and can put his front paws on my shoulders when he greets me. Gibbs is now 9 months and still growing! Gibbs has German Shepherd coloring, a Rottweiler body and the disposition of a Lab. He's just the best dog in the world...but he has a slight limp that gets worse after running more than a few hours. Deb thinks he had a little bit of a limp before the truck accident, but it's definitely worse since then...so rolling around the cab of the truck didn't help him any. 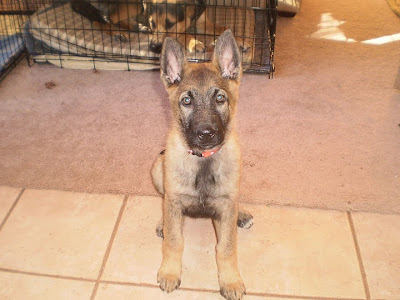 ...and here's Marley, our little girl
We got Marley at a German Shepherd rescue foster home in Albuquerque. She's most likely 99% German Shepherd and was found with her brother in a ditch alongside the highway at 4 weeks old. When we got her at 7 weeks old, she weighed 14 pounds, now at 10-11 weeks, she's weighing in at 25 pounds and very much looks like German Shepherd. She's a sweet little girl who looks up to her big brother a lot, even while biting down on his ear with her needle teeth ;-)

Both Gibbs and Marley will be at the Hardrock course marking, so you'll get your chance to meet them if you're there.

Our race schedule is coming together finally...

On March 12th we are running the Salida Trail Marathon
April will be long training at altitude, taking in most if not all the MTNRNR series of runs.
May we are planning on Collegiate Peaks 50 miler, then sweeping the 50 mile race at the Jemez 50 the week after.
June we'll be at the San Juan Solstice 50 in Lake City, Colorado.
July will be Hardrock (regardless of whether we get in or not) and the Speedgoat 50K in Utah.
August will be more MTNRNR series runs and recovery
September Deb is running Wasatch 100 and I will be running the Bear 100.
October I hope for a Grand Canyon Rim to Rim to Rim or  the Cactus Rose 100 in Texas .
November may possibly be the Chimera 100K in Ca., my first race as a 60 year old!

Guess that's it! Deb's recovering nicely from her truck accident, the clavicle is healed and her lung contusion seems to be improving slowly...and just the fact that she's now training at around 40 mpw is an improvement. We will gradually be increasing our training miles in the coming weeks.

Next post will most likely be the Salida race report!
Steve and Deb (and Gibbs, Marley, Harley, Murphy [cat] and Thor [canary])
Posted by Steve Pero at 7:52 AM 11 comments: