This past Saturday Deb and I traveled a little south of where we live to Mt Taylor, which is close to Grants to run the Mt Taylor 50K. It was a fantastic race put on by Ken Gordon, Kurt Coonrod and their team of volunteers. I was originally planning on running the Bear 100 this weekend, but withdrew from that to focus on shorter, faster races that I prefer and I'm glad I did!

On to my experience...I went into this feeling blah and this helped control the pace at the beginning, as I started out with my friend Doug Seaver. The race start out with a long climb and has several really long climbs, but also the fast downhills road sections you can run hard and get back on pace. 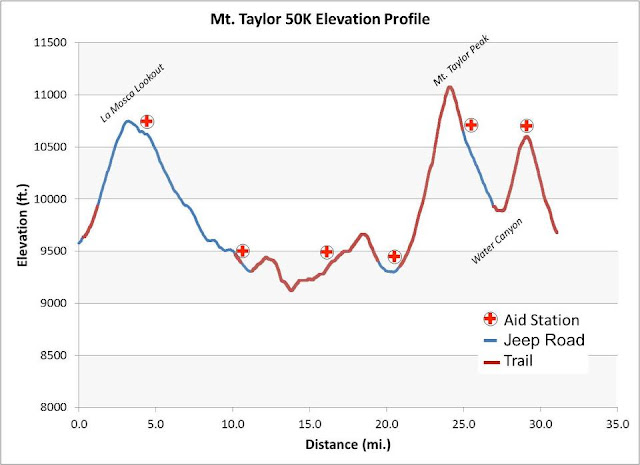 It just so happened that Ken and his team seemed to have this race run so that most of the downhills were good running roads, so the time you lost climbing, especially up to 11,000+' Mt Taylor  you could get back a lot of that time running down the roads....that is if you fueled and hydrated well and also had quads that could take the beating ;-) I felt like I was running fast downhill more than anything else! 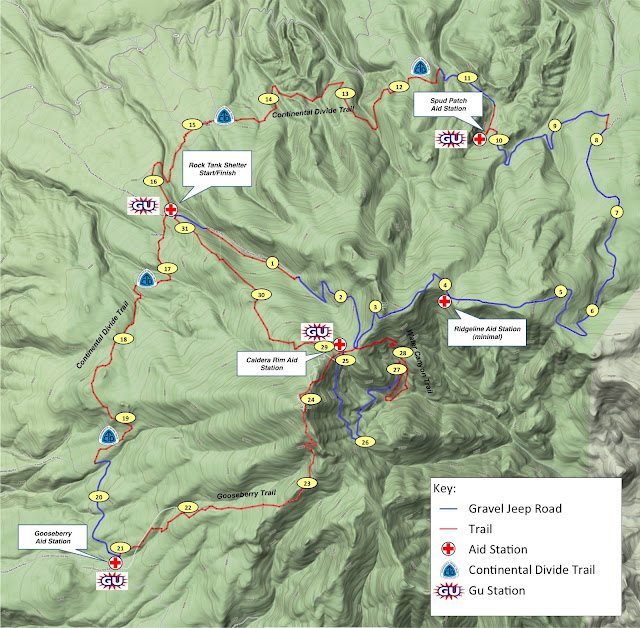 Here's a great map of the course

Deb's goal here was to feel her legs out after recently running the Wasatch 100 (33:11) and before that running Hardrock, Speedgoat 50K and the Silverton Alpine Marathon! What a year she's had! Well at halfway, it made more sense to stop on the tired legs than go on and possibly be out there many hours after I finished. We had to get home to our dogs... 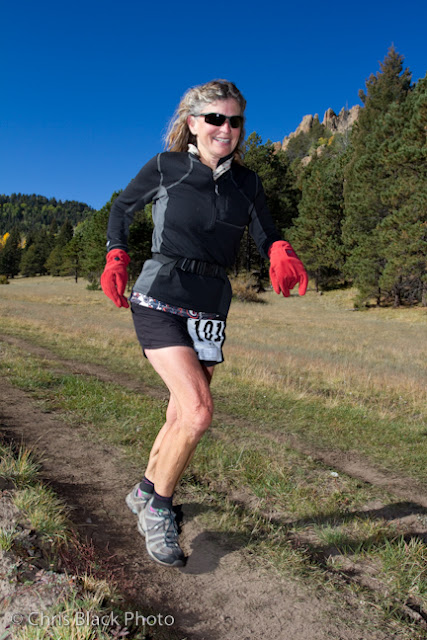 Deb happily cruising along the course

My race couldn't have gone better. Like I said I started with Doug really quite easily, holding back until I felt like I could begin racing. This didn't happen until the first downhill. The view as we topped the first climb was  incredible.

After we topped this first long climb, it was time to start racing....Doug took off first with me in tow and we passed many who either weren't as comfortable running fast downhill or had gone out way too fast. I will say during the whole race I only had one guy pass me and stay ahead of me. He finished one place in front of me and was also wearing my now favorite trail shoes, the Nike Lunarfly. 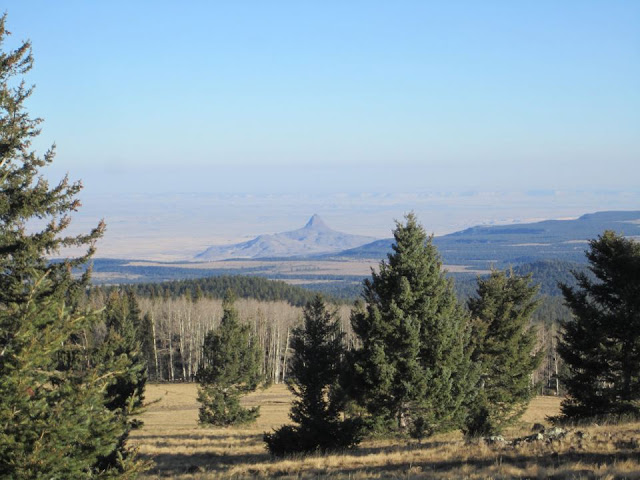 Another one of the incredible views

Soon we were at halfway, which is also the Start/finish, but we now were to go on a different loop, which would include the incredible climb up to the summit of Mt Taylor, which had to be at least three miles long. I reached halfway at around 3:15 so I was now thinking I had a good shot at breaking 7 hours. One of my goals was to try and be the first over 60, which I can usually do if I push the pace as much as I can for as long as I can and I figured it would take sub 7 to do this. Just after the aid station I stopped at my truck to get rid of some clothes, dump my trash and drink a chocolate Silk (Soy milk). I was running sortof minimalist for an ultra, wearing only shorts, singlet and carrying one hand held bottle. This worked perfectly for the 2nd half. The 1st half was a bit chilly, so started with a LS shirt over my SS and a thin jacket. I dropped the jacket and LS shirt at the truck as the temps were warming up. 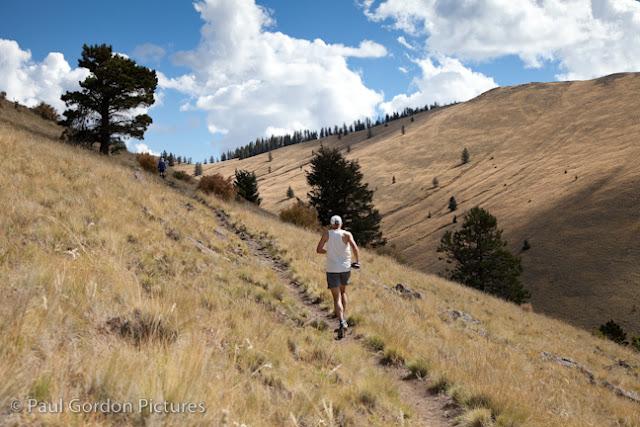 After the halfway aid, the trail was somewhat flat to the mile 21+ aid station...I spent most of this time back with Doug who I caught up to. We ran into the aid station together, I told him I wasn't stopping and that was the last I saw of him until the finish. 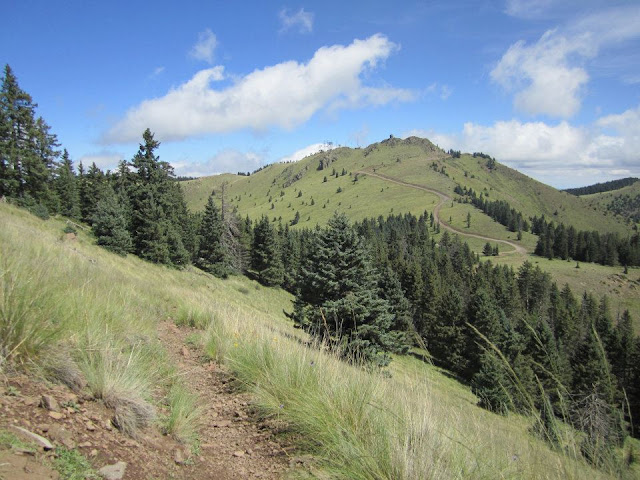 Climb up to Mt Taylor in the distance

Starting at the aid station at Mile 21, we began the long climb up to Mt. Taylor. This climb was to me the highlight of the race and reminded me a lot of some of the Hardrock climbs. It climbed from around 9300' to 11,301' and in maybe 3 miles. It surely took me 1.5 hours, but I didn't time it. Starting up this, I decided to do my Gu Roctane Double Espresso gel for the sugar and caffeine kick. It worked as I passed several and only got passed by that one guy, Chris Brady, who finished just in front of me. I felt strong all the way to the top and took a breather at the summit. 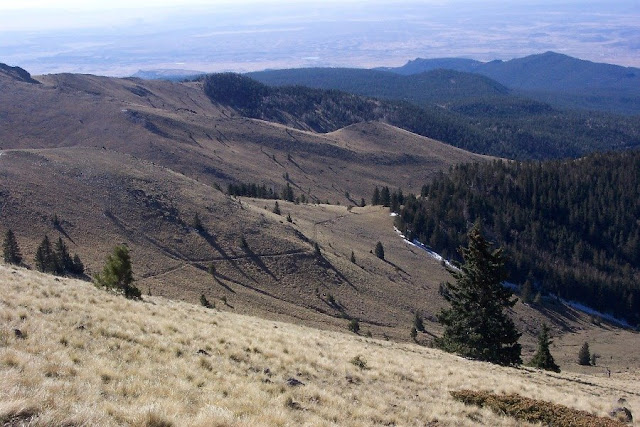 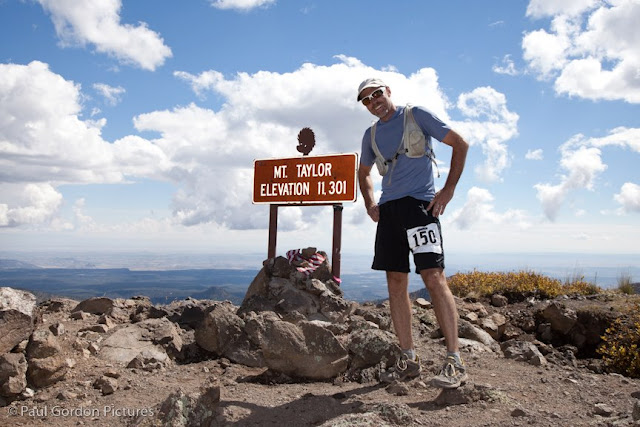 Up on top of Mt Taylor the views were incredible...I never really knew which direction I was looking at, but it didn't matter and it was here I wish I had brought my camera. I turned in a circle to take in the incredible 360 degree view, took a deep breath and started down the single track trail to the Caldera Rim aid station, about mile 25. There I grabbed a GU, filled my bottle and started down the fast downhill road in pursuit of those who went out to fast and I knew there would be many. I think I caught 3-4 runners before the next long climb back up to the Caldera Rim aid station again, where I got some more water, a cup of Sprite and started to crank down the final 2 miles....and what a run it was! I crossed the line in 6:29:14 in 37th overall, feeling no worse than when I started other than tired legs. 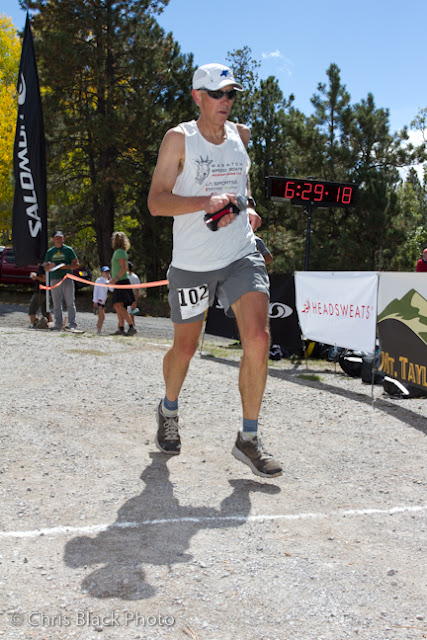 Crossing the line feeling fantastic, Deb in the background

I was sure I had finished first in my age group with what I considered to be my best run of the year, but later found out that Bob Parks ran an incredible 6 hours in 23rd place at 61 year's young! Ken told me later that Bob was a 2:29 marathoner in his prime, while I was a mere 2:49 marathoner, so didn't feel too bad about it....plus there was no way I was going to get another 30 minutes out of my body! 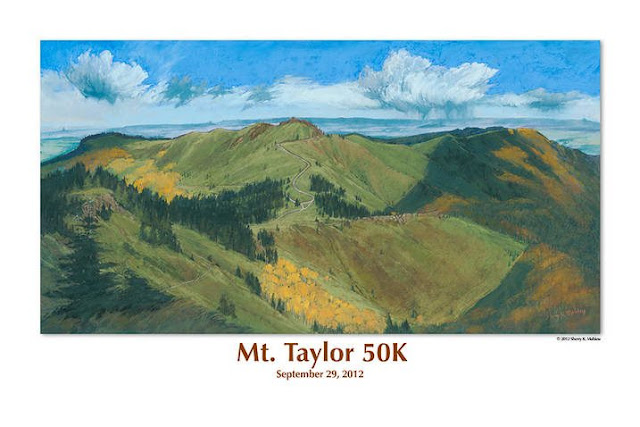 This is the print that the leaders got as awards, painted by Sherri Kae Mahieu
(Sherri just so happened to have painted the first Hardrock finish poster I got in 2001)

As I end this post I'd like to again thanks Ken and his team of volunteers for putting on an incredible race that is going to become one of the top 50K's in the country. I can possibly seeing this as being a part of the Skyrunner series like Karl Meltzer's Speedgoat 50K. It is well marked, plenty of aid and a great finish with Marble Brewery beer on tap and all the meat you can eat at a great post race BBQ!

Also thanks to Paul Gordon for coming out and taking pictures during the race. Paul is Ken's brother and most of the pictures in this blog was taken by him. You can see the rest of his Mt Taylor photos here.

Here's a blog post by a real fast runner who ran MT... http://jessearmijo.blogspot.com/2012/10/mt-taylor-50k-race-report.html

So I'd suggest if you want to run this race next year to find out when entries open and get in it quickly....the race sold out this year in it's first year.

As for me and Deb, I am hoping to run a road marathon in Tuscon in December, but that all depends on how the legs feel come the end of October when the race entry fee increases. Other than that, we both go into semi hibernation and get the house ready for winter, which means wood splitting. We're also doing several projects one which includes fencing in an acre of our property. Might not get that one done before winter sets in...

That's about it and until next time!
Happy Trails!
Steve and Deb

Great report and congrats on your stellar run. It's wonderful to run a race where you feel good the entire time.

Yo Steve, those photos are killer. Don't know how you and Deb snapped those off while motoring along. Great runs both. Awesome report.

Yo Steve, those photos are exceptional. Don't know how you and Deb snapped them off while rippin-up 50K of singletrack. Terrific runs both. Awesome report.

Great run you two!! Way to defy age groups and whatever - and beautiful sights.