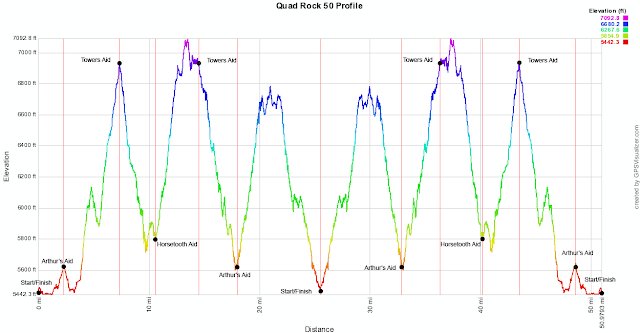 This past saturday we ran the Quad Rock 50, put on by the elite runner, Nick Clark. The run is in Fort Collins, Colorado and is a stepping stone race to the Hardrock 100, which is in 8 weeks. Looking at the profile above you can see that this is a challenge and good use for Hardrock prep. This year's course was 2 miles longer than last year, which was the first running. They had to do this course change to avoid a burn area....this kept me from my goal of sub 12 hours ;-) 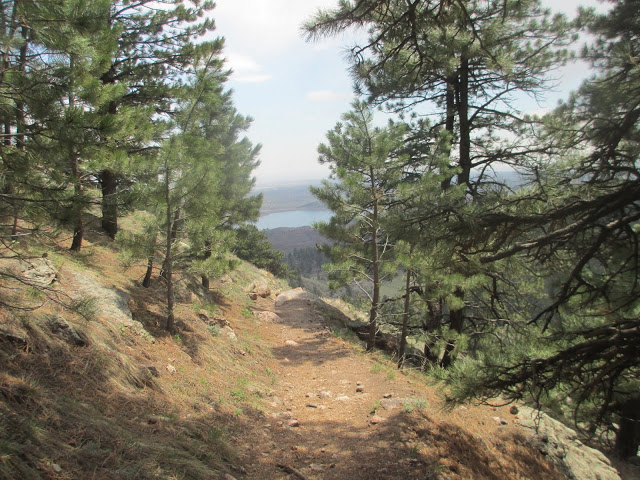 Some of the trails were nice with great views

Going into the race, I was one of only two over 60 year old runners in the race and they didn't have an over 60 in the race last year (I guess we're a rarity). Deb's brother Drew was the only other over 60 runner at age 65, but showed up with a head cold and, as we learned afterward, ran with a slight fever...so he got in a good 25 mile training run for Hardrock.

A few weeks ago, while on a training run in White Rock, NM., Deb tripped on a steep downhill and slammed into some rocks, banging her knee on a pointy boulder. For a week she was sure her kneecap was fractured and still think there's a hairline break in it. She thought Quad Rock was not going to happen, but the weekend prior to the race, we went on an easy 10 mile run, she didn't feel any worse and decided to go and run the 25, knowing she has the Jemez trail run coming up in 2 weeks. So this was a 25 mile Hardrock training run for her, too and a fine way to spend Mother's day! 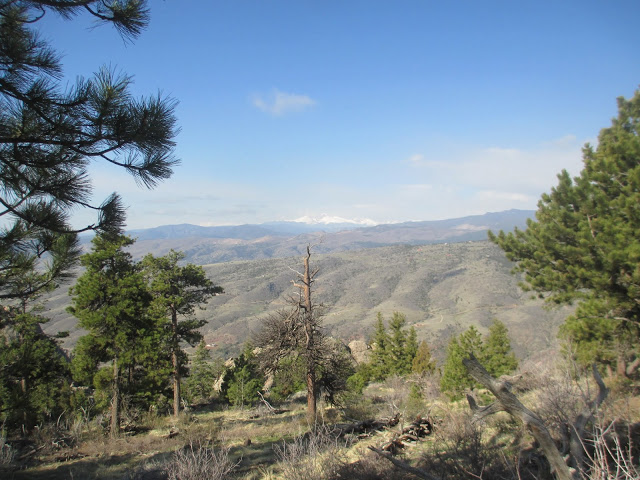 View of snowy mountains in the distance

As for my race, my plan is always to not have anyone older than me in front of me. With Drew sick, all I had to do was finish and that would happen....but I also had a goal of a sub 12 hour finishing time. At the turnaround I was 5:45, which didn't give me much cushion time for the 2nd loop, so as hard as I tried, I came up short by 16 minutes. The RD, Nick Clark, had to add about a mile per loop to avoid a burn area, so last year I might have done it! Official stats for me are 79th overall, out of just under 200 starters, 1st over 60 in 12:16:39. I can't really complain about that, I guess. 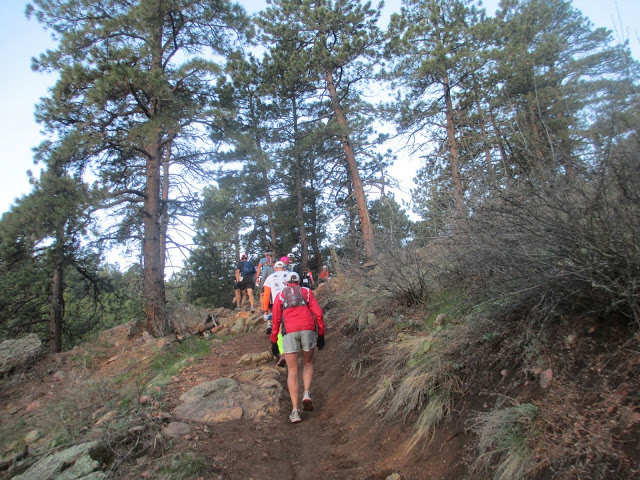 Lots of these uphill trails to test the climbing ability

Anyway, Quad Rock is a challenging race that will test even the best. Some climbs are several miles long and the downhills so technical, you can't run! The altitude isn't too bad for me, who sleeps at 8200', but could be a challenge for anyone living a lot lower. I never noticed the altitude, which goes up over 7000'. 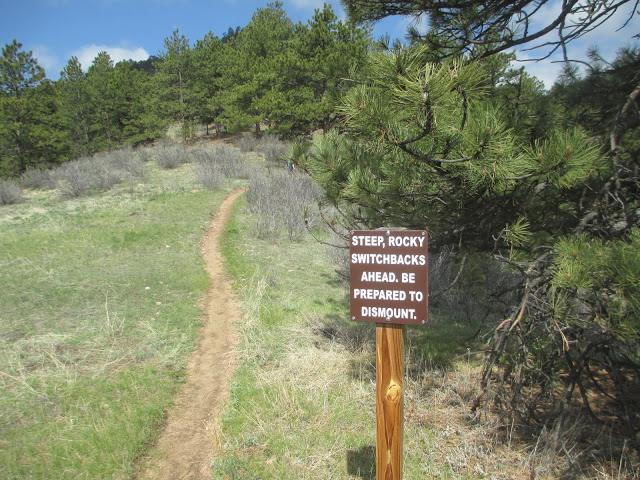 Looks nice here, but just around the corner...

I had a good run until around mile 40ish (after the hail storm), when the wheels started coming off. Up to the point I was able to run a good portion of the trail up and down, but after the storm, all the rocks were slick and the mud was like grease. At that point I got too careful to be able to let it go, so just moseyed on in until the last downhill after Tower's Rd aid...pretty much pushed in that last 7 mostly downhill miles. 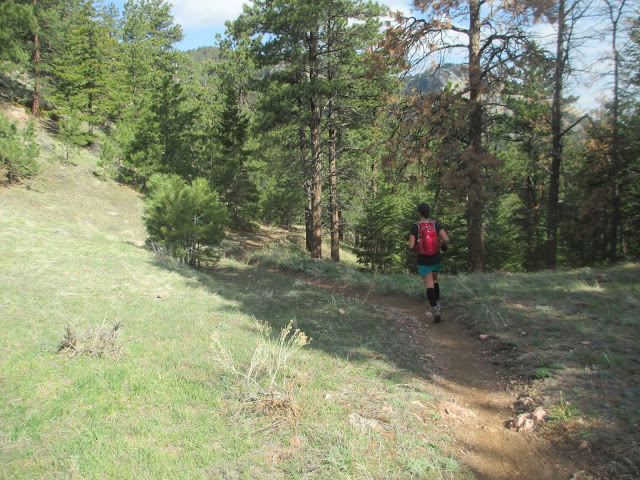 One of the nicer sections of runnable trail

Today, two days later and after an 8+ hour drive home yesterday, my legs don't feel too bad. They felt worse last night, but today I am standing at my desk as if no race happened. 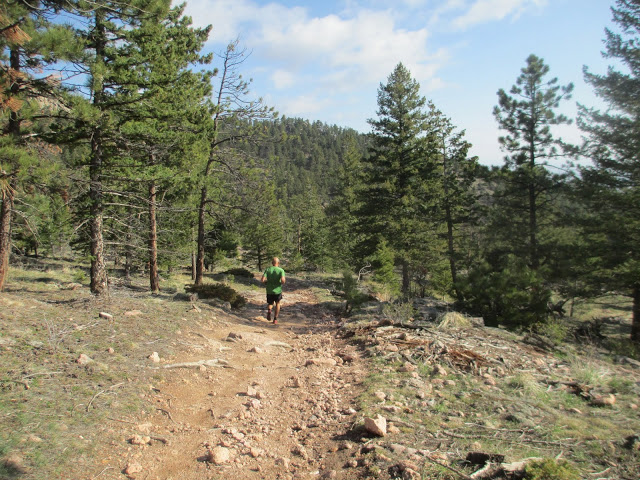 ...and one of the medium technical sections

I took many pictures and several videos, to see them, go here. 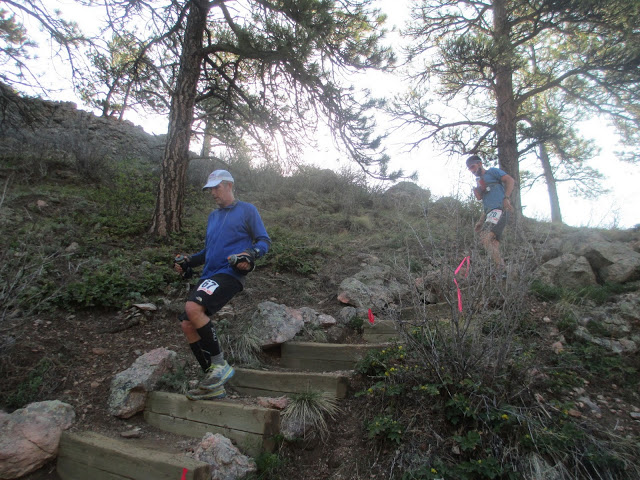 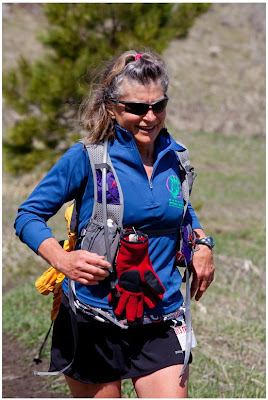 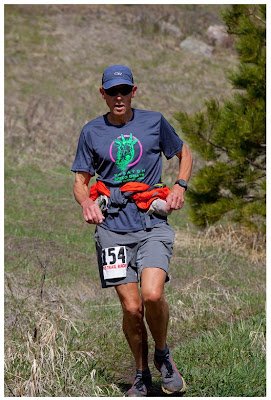 Now it's time to go into the final phase prep for Hardrock, which will be a lot of uphill hiking with poles. I figure about 5-6 weeks of training, then rest up for the big weekend. I also have the Last Chance Saloon aid station at the Jemez Trail Runs I am captain of, so next weekend will mostly be preparing for that. I brewed a batch of beer to serve the runners there, which is called "Mexican South of the Border Thirst Quencher", which is basically a Tecate or Corona clone. A lot of the prep will be Deb making soup and pumpkin pie for the runners and then the biggest challenge is, as always, carrying in to the aid station location, about 50 gallons of water. I generally do this alone the day before the race and is about 2/3rds of a mile round trip, so I consider this good training for Hardrock, too ;-) It's usually takes me 12-15 trips...

So that's about it, my next post will most likely be the days after the Jemez Race and will post the pics I take and just talk about how it went, then the final  several weeks leading to Hardrock will be nothing but eat, sleep, and Hardrock prep.

PS: Wanted to mention that I wore my Montrail Fluid Flex trail shoes for the first time in a race and although I found them to be quite comfy in training, I don't think these have enough to take on the Hardrock. My shoes are destroyed after Quad Rock. I think i'm going to look into the highly rated Inov-8 Roclite 295's.

Right on. Sounds like your summer running is humming right along. I'll try to sneak away from my timing duties at JMTR to visit the Last Chance Saloon aid station.

Jason....swing by for a brewski!

Nice report Steve. I wish I was getting ready for Hardrock too - miss Silverton so much.

I just picked up a pair of RocLite 295s and I'm favorably impressed. I think they'll be my go-to shoe for mountain stuff this summer.

Thanks, Adam....you will be missed in Silverton for sure. Come back and win it someday!

Also coming from you, that comment on the Roclite 295's is all I needed to hear, will be looking forward to hearing how they handle the Whites.

Awesome job on a tough course, Steve! Good to see you and Deb this weekend. Good luck with HR prep and I'll see you in Silverton!

nice running Steve. You should be ready for HR after this one.

Thanks, Shelby....you did awesome! Congrats on using some of the things you've learned to get through a tough 50 mile race! Have fun at Bighorn and see you in Silverton!

Thanks, Bill....you should know, if anyone does! See you in Silverton?

I'm also a big fan of the Roclite 295's, for rough trail running or speed hiking. Hopefully they didn't screw it up when they changed to the bright yellow sole, but I did read one blog post that said they were narrower now (although I kind of doubt that). Panicked, I stashed a spare pair of the old version just in case, found at www.tinytrekker.com
Good job at the Quad. I only made it to 43 miles at Wapack--oh the shame!

Great run Steve! Glad you and Deb made the trip up to the Fort. The course reroute actually made the course slightly shorter (it was around 52 miles last year too). I guess we measure them in "Clark" miles up here. A nice Hard Rock prep! See you all in Silverton!

p.s. Loved your photos from the day! Thanks for sharing.

Thanks, Rob....I thought the course was measured at 50.8 and he added to that. Thanks for setting it straight. The course was fantastic, see you in Silverton!

Josh, I gave my 2 stouts to Nick and he enjoyed them ;-) Sorry I didn't get you any, maybe another time.
Great to meet you and if you ever have any questions on home brewing feel free to email me. Here's one home brewing store I found for you to check out up there... http://www.hopsandberries.com/
Best of luck!

Steve & Deb - Remember me??Can't believe I've tracked you guys down! I hunted for an e-mail address without success. Please feel free to reply to me via e-mail: ultrapeg@yahoo.com (still have the same e-mail!) Have a couple of things I wanted to tell both of you. So glad to see that you are still running ultras! Good for you! We now live in Custer, SD (heart of the Black Hills). We're practically neighbors. Hope to hear from you. I'll give you an update. Best regards, Peg Ryan

good to meet you all yesterday....it was a big day for LT100 training.....I'll take your advice and look at San Juan Solstice for next year...I'll do the Hopi Waterisliferun.com 50K

Good to meet you, too, William!